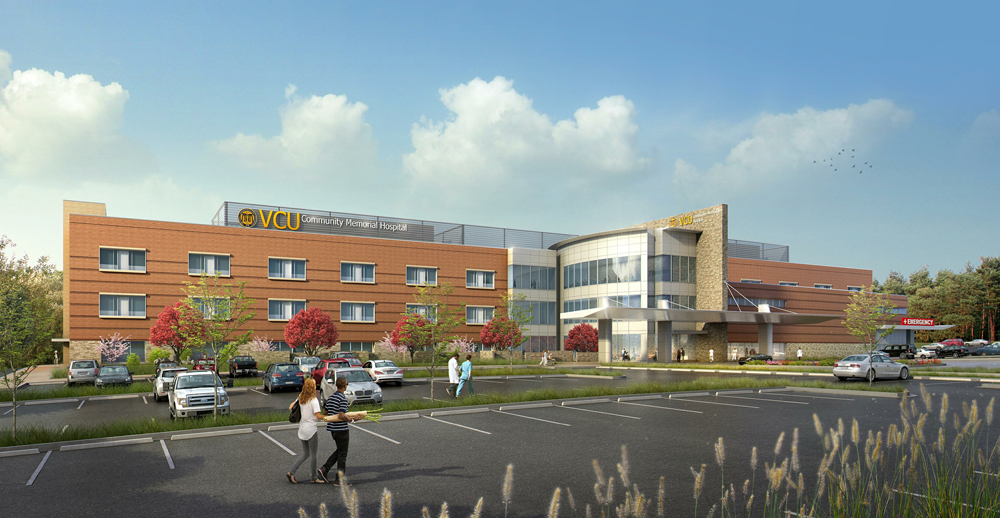 VCU Health Hospital officials released a rendering of the new state-of-the-art facility that is scheduled to open in late 2017.

The new facility will also include three operating room suites, a cesarean section suite and a 16-bay emergency department.

The new hospital will have a permanent cardiac catheterization lab to provide the most advanced cardiac care in the region and a full complement of diagnostic services including MRI, CT, nuclear medicine, cardiac, vascular and pulmonary studies. With the new hospital, obstetrics also return to the region.

With patients, families and visitors in mind, the facility will have modern décor with an abundance of natural lighting, along with a spacious cafeteria, a beautifully landscaped courtyard and ample, convenient parking.

While welcoming the community to the event, W. Scott Burnette, CEO, VCU Health CMH, stated, “Today’s groundbreaking is symbolic of the fulfillment of just one of the commitments that VCU Health made to our community last year, namely, the construction of a state-of-the-art hospital.”

“This facility will be a beacon of hope for all who are in need of care and it will be an anchor for future economic development for this region,” he said.

After the welcome from Burnette, the Mecklenburg County Air Force JROTC gave the presentation of colors, followed by Wayne Parrish, chairman of the VCU Health CMH Board of Directors, who recognized special guests.

Michael Rao, PhD, president, VCU and VCU Health System, and John F. Duval, CEO, VCU Hospitals and Clinics were also in attendance to discuss how the community will benefit from the new state-of-the-art facility.

After ground was broken, hospital officials unveiled a rendering of the new hospital to the community in attendance.

Guests then enjoyed a concert by the Homegrown Bluegrass Band, health screenings and family fun activities including children’s bounce houses and hay rides.

The new hospital will be constructed on approximately seventy acres of land and is scheduled to open in late 2017.

In conclusion, Burnette said, “Lastly, I would ask that all of the CMH employees, auxilians and volunteers who are here today to stand and be recognized. Bricks and mortar are very important. But, it is these people who truly make the medical services we provide so exceptional.  Our past, present and future success would not be possible without their dedication, service and their caring attitudes.”

CMH was founded in 1954 and has served the health care needs of Brunswick, Lunenburg, Mecklenburg and surrounding counties for more than 60 years.