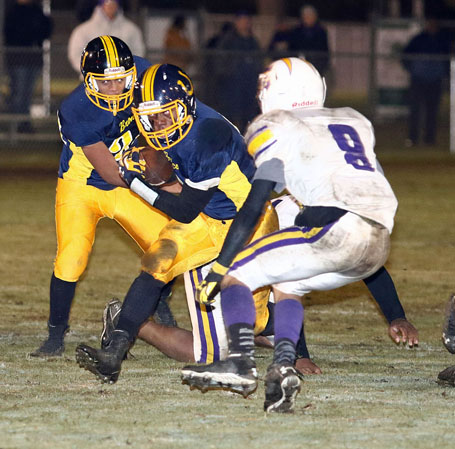 In a game that featured 741 combined rushing yards, 99 points and 28 penalties, the Chargers of Central Lunenburg outlasted the Franklin Broncos to earn a 57-42 victory in the second round of the state playoffs.

Deshawn Moore added 143 yards on the ground and two touchdowns.

Malik Foster scored twice on the ground, rushing for 39 yards on four attempts.

The game was a back and forth scoring affair. Central scored the first touchdown of the game, but Franklin bounced right back.

The Broncos held the lead after each of the first three quarters, but the Chargers scored 21 unanswered points in the fourth quarter to seal the victory.

“It certainly was a high-scoring game without much defense,” said Central’s head coach Will Thomas. “But our defense really stepped up when it counted. There should be no shame on the other sideline. They’re a really good team.”

The Chargers advance to the third round of the VHSL Group 1A playoffs and will travel to Riverheads for a 7 p.m. game on Friday.