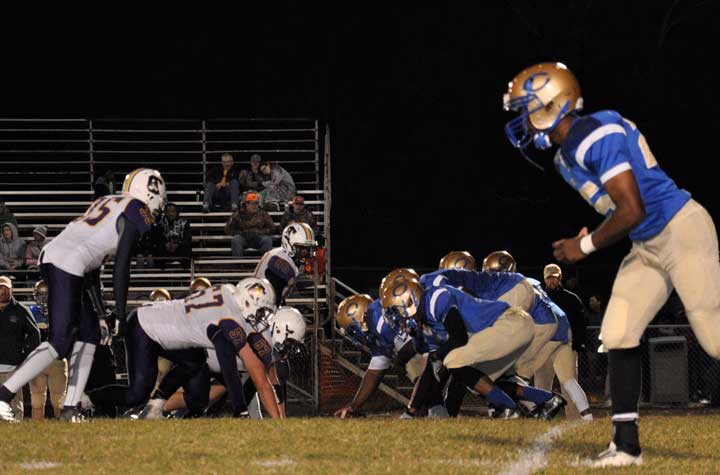 Central High School’s defense, at left, including Tyler Williams, No. 35, Jackson Parsons, No. 57, Kester Long, No. 67, and Raymond Alexander, No. 80, is poised to advance on host Cumberland High School on Friday.

The win enabled the Chargers to go 8-2 and wrap up the No. 4 seed in Region 1A East, which gives them a first-round bye in the playoffs and a second-round home game.

Central Head Coach Will Thomas likes the perk of having a home game, but he has a different perspective on the bye.

The focus is for the Chargers to use the next week to heal up and get rested.

“But you don’t like taking that week off because we’ve been playing pretty well,” he said. “You get playing pretty hot, and then all of a sudden, you’ve got to take a week off. I guess if I had my choice, I would rather play, but I also don’t want to give up the higher seed either.”

Central will host the winner of Friday’s game between No. 5 Altavista High School (7-3) and No. 12 Surry County High School (4-6).

The Chargers are quite familiar with Altavista, which handed them one of their two losses this season — a 33-19 defeat in the season opener.

Cumberland (1-9) has had a difficult year and could not keep up with Central, though the Dukes did jump out to an early 7-0 lead on a big touchdown run.

The Chargers responded quickly, leading 28-7 after the first quarter, 42-7 at halftime and 55-7 after three quarters.

“It was a fun game,” Thomas said. “Every single player played, which is always good. We pulled up a few freshmen and sophomores from the (junior varsity) team.”

Senior Malik Foster had a monster game for Central, with 15 carries for 281 yards and four touchdowns on runs of four, 40, 17 and five yards.

Junior Keenan Anunay had seven carries for 101 yards and two touchdowns on runs of 42 and 22 yards.

In the second half, freshman T’zion Wilkerson scored on runs of 45 and 42 yards.

“He’s got a bright future if he can get in the weight room and continue to build,” Thomas said.

The Chargers totaled 503 yards on the ground.

Defensively, they were led by seniors Raymond Alexander and Dion Graham, who had six tackles apiece.