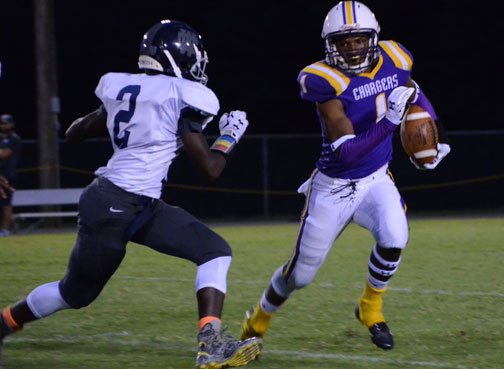 Photo by Ellie Richmond Central High School junior Keenan Anunay, right, and the Chargers will be looking on Friday to avenge their 33-19 season-opening loss to Altavista High School.

Central preps for rematch with Altavista

Central Head Coach Will Thomas said the No. 5-seeded Colonels (8-3) are much better than they were in week one.

“They have a new QB who is an exceptional runner but can also throw the ball well to some really good receivers,” he said, referring to junior quarterback Jacob Adams.

Thomas said he has not had to harp too much on the 33-19 loss to the Colonels because his players know they did not play their best game that night.

“I think we got intimidated in August,” he said. “It was hot, and we were out of shape. Things didn’t go all that well for us, and when we got behind, we folded.”

When the Colonels have the ball, they run it very well.

“They are a power team, but they also have a lot of speed and can stretch the field,” Thomas said.

He described the Colonels defense as very quick and very disciplined.

“Altavista is very well coached,” Thomas said. “They do the little things well.”

Central will be missing a few key players, but hope to have two key offensive stars — senior Malik Foster and junior Keenan Anunay.

Thomas hopes the Chargers will be sharp after their bye week.

Kickoff for Friday’s game is set for 7 p.m.

The Kenston Forest School varsity football team entered the final game of its season Friday hoping for a victory to... read more