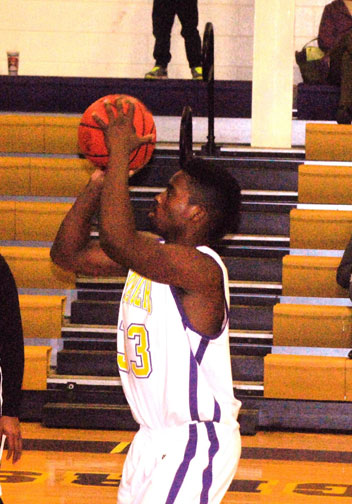 Central High School’s Raymond Alexander will follow up a strong senior campaign on the gridiron by being a key part of the Chargers’ efforts on the hardwood.

Chargers prep for the hardwood

The Central High School varsity boys basketball team looks to be in the running for the Conference 42 championship again this year, while being competitive in the James River District.

“It’s a tough district to play in,” Chargers Head Coach Mike McGrath said. “Last year, all of our games were close. I expect we’re going to have to fight for every win that we get because the district is so difficult. And then when we get to conference play, I know Mathews (High School) returns their two best players, so once again, I think we’ll be in the top half of the conference seeds. Last year, it kind of came down to homecourt advantage.”

Central must press on this season without its leading scorer and rebounder from the 2015-16 campaign, as forward Jeremiah Davis graduated and is now playing for Randolph College.

“Watson’s an excellent point guard,” McGrath said. “Alexander is just a beast in the paint. And then Jones, he can play inside or outside.”

Up until Friday, as many as eight players were still playing on the successful Central varsity football team that reached the second round of the Virginia High School League Region 1A East playoffs.

The Chargers begin the hoops regular season Wednesday, Nov. 30, on the road against Randolph-Henry High School at 7 p.m.