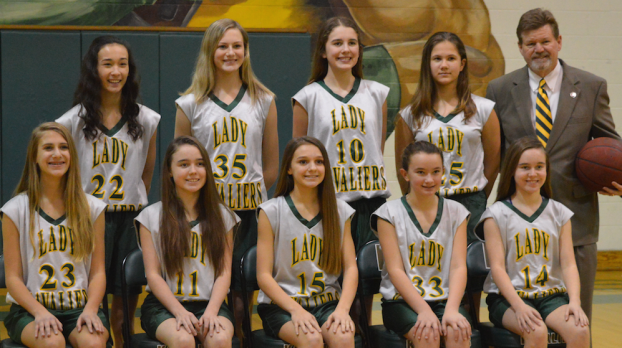 “Of course, I’m very proud of the Lady Kavaliers’ record,” KFS Head Coach Ben Green said, “but even prouder of how they conducted themselves on and off the court. Winning isn’t always about some number on a scoreboard, its about how we grow as a team.”

He noted that the Lady Kavaliers featured players ranging from the sixth through eighth grades who had a wide variety of skills and experience.

“The team was blessed to have six eighth-graders who all demonstrated various levels of leadership,” Green said. “We varied our captains from game to game to give each player the experience of running a game on the court. My philosophy concerning middle school teams is that of (giving players) similar playing time, and in most cases the athlete played 12 minutes out of the 24-minute ballgame. This gave all players the opportunity to play in a game setting together and be comfortable on the floor regardless of who was in the game.”

The coach said there is no doubt that the key to the Lady Kavs’ success was hard work and a total commitment to practice.

“This team amazed me by nearly begging to have extra practices on the weekend before big games,” Green said. “The Lady Kavaliers made practice and other team activities a priority, all while exceeding academic standards called for by the school. Teamwork was the foundation for this season.”

Leading the squad in scoring was Shelby Gunn, with 86 points, Hanna Mahaney, with 65 points, and Gracie Gunn, with 62 points.

“Taylor Maione consistently led the team in assists and hustle points,” Green said. “Juliette Kirker and Walker Green lead the team in defensive stats. All 10 Lady Kavaliers scored this season, and each contributed in every game.”

“After trailing the Lady Warriors 6-0 after the first quarter and 15-7 at the half, the Lady Kavaliers steadied themselves during the intermission and outscored their opponent 22-6 in the second half to win 29-21,” Green said. “It takes quite a bit of poise and maturity to overcome such a deficit in front of the home crowd.”

Seven of the middle school players made up the KFS junior varsity team that finished 9-5.