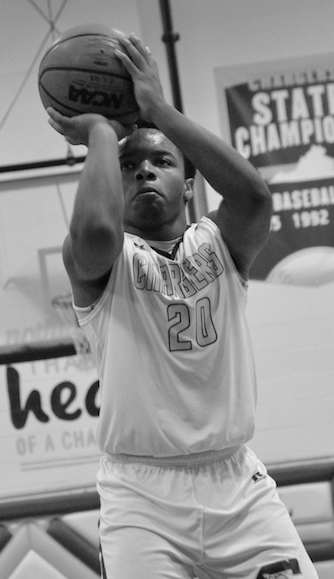 The 2017-18 basketball season came to a close Feb. 20 for sophomore guard T’zion Wilkerson, pictured, and the rest of the Central High School varsity boys team. The No. 7 Chargers lost 83-58 to host No. 2 Riverheads High School in the regional quarterfinals.

Chargers fall to 1B runner-up

Central’s High Schools varsity boys basketball team lost 83-58 to host No. 2 Riverheads High School in the Region 1B tournament quarterfinals Feb. 20, bringing the 2017-18 season to an end for the No. 7 Chargers.

“We did not play our best,” Central Head Coach Mike McGrath said. “While our effort was good, our game was off.”

He pointed to the Gladiators’ hot shooting from three-point range as being the deciding factor in the contest.

Riverheads went on to defeat No. 3 Carver College and Career Academy 57-48 in the semifinals and finished as regional runner-up after losing 72-47 to host No. 1 Cumberland County High School in the title game.

The Chargers finished the season with an overall record of 5-15.

McGrath said the high point of the 2017-18 campaign was when Central defeated Cumberland 70-61 at home Feb. 1.

“We played our best that night,” he said.

He noted that the season’s relative low point for the Chargers was a three-game stretch in which they were missing three starters.

As Central’s core players returned to health toward the end of the season, the team won three of its last five regular season games.

“If not for illness and some injuries, we could have had a better overall record,” McGrath said.

Ten of the team’s 14 members will graduate this year, which significantly affects McGrath’s task of preparing for the 2018-19 season.

“We will be in a total rebuilding mode,” he said. “I hope to get a lot of work in this summer to get ready for next season.”