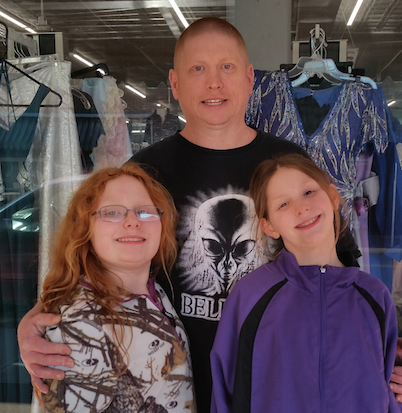 Chris Hofler, middle, gives back in the community with daughters Christine, left, and Joan, right.

In his free hours, he spends time with his family, and volunteers.

Hofler has volunteered for approximately a year with BLISS of Lunenburg LLC.

When he volunteers, Hofler said he will “restock, make sure everything is straight, organize the area, go get donations, pick up, and we also deliver donations to help out the community with people in need, help them out.”

He said his favorite aspect of the position is being able to help people who need it most. He said this would include community members and members of the area fire departments.

“Helping people out, make sure people are being taken care of,” Hofler said.

But Hofler doesn’t volunteer alone. Often, his family works alongside him.

He said he has four kids, and that he has brought his kids in to help volunteer at the store.

“I’ve got them helping out too,” Hofler said, “and they do real good. They learn community service, and they learn how to deal with money, customer service. So when they get a job, they know what to do.”

His work is a reflection of the three words he chose to best describe himself, the words being “stable,” “committed” and “honest.”

A community concert, hosted by Victoria Baptist Church located at the corner of Eighth Street and Washington Avenue, is set... read more