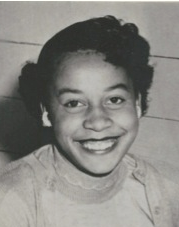 Grand Lady and Mother to all, Mrs. Sarah Frances Thomas Harper, 82, went to her heavenly home and reward on Sunday, March 4th, 2018 around 10 a.m. after an extended period of illnesses. Funeral services took place on Saturday, March 10th at 11 a.m. at Mt. Gazerine Baptist Church with interment at Greenview Cemetery.

Born in Lunenburg County, Va. on May 17th 1935, she was the only daughter of the late Lucille Edmonds Thomas and Macklin Edward Thomas (Bagley). Her formal education began at the Trinity School in Kenbridge Va. through the 7th grade. She then attended Kenbridge Training School until the 9th grade (the highest at that time) for higher learning. She joined the family church, Gilfield Baptist, where at age 10 she was baptized and began her growth and development as a born-again Christian in God’s service. Mom Frances sang in the church choir, served as an usher, and also taught Sunday School.

She united with the late Lewis Harper Sr. from Kenbridge. In the fall of 1963 the family moved to nearby Blackstone, where she attended various churches but mainly Mt. Gazerine until her illnesses prevented her from physically participating.

Mom Frances’ great faith led her to the act of dedicating her entire life to her family and many other families throughout the community. Her legendary skills were often called upon to do everything from cooking, canning, and cleaning to educating, advising and caring for people young and old. If you tasted one of her famous sweet potato or coconut pies, you knew that she had God-inspired talent that she willingly shared with everyone.

Mom Frances worked extremely hard at everything she did. In the 1950s, she worked as an accountant/clerk at Camp Pickett, Va. Later, she assisted several Blackstone and Lunenburg merchants in operating their facilities. She thoroughly enjoyed working for Mrs. Wava Allen at Allen’s Motel.

Throughout the 1980’s, Mom served and worked seasonally at Fort Pickett. She worked hard on the large farms and in the fertile fields of Lunenburg, Nottoway, and Brunswick counties. Everything and everyone mattered. This was very important to her, and Mom Frances had a special an exceptional gift of being able to remember people’s names and significant details about their lives. She knew no strangers and always opened her home to all. Watching her families and her flowers grow and trying to help anyone in need were her greatest passions in a life dedicated to serving the needs of all people.

Mom Frances was preceded in death by her first daughter, Sarah Frances, and her youngest son, Sam (Bobby); her husband, Lewis Everett Harper, Sr., her parents and children, Bernie, Lewis Jr. and Floria.