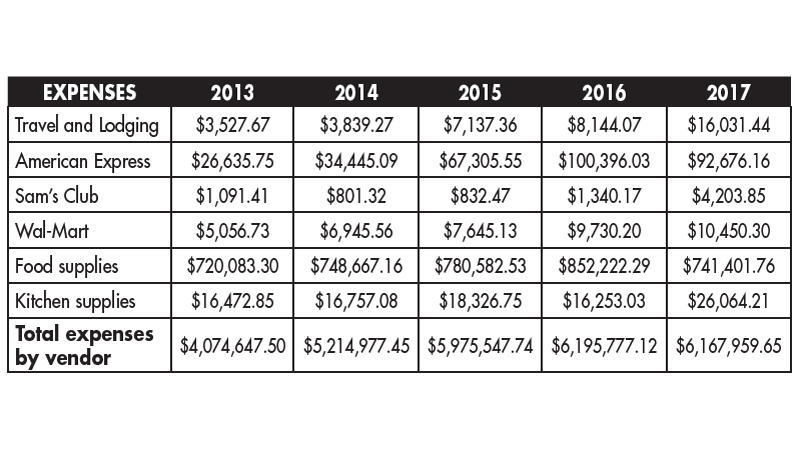 The graphic above details a five-year trend in expenditures at PRJ that was presented to the Piedmont Regional Jail Authority during its board meeting recently.

Representatives from Robinson, Farmer, Cox Associates (RFC) addressed the Piedmont Regional Jail Authority board about its review of credit card transactions over a fiveyear period during its meeting Aug. 15 at the Farmville Train Station. RFC Managing Director and Founding Member Robert Huff and Audit Manager Kristen Choate said the purpose of the report was twofold: to find inconsistencies and lack of “ordinary and necessary” documentation for credit card purchases, and to provide documentation that would help the jail going forward with future budgeting. The design of the report differed from typical audits as it focused in particular on credit card transactions that were taken by the jail between the period of July 2013 to February 2018. A copy of the report obtained by Piedmont Regional Jail documented significant increases in travel expenses without proper documentation as the reason for the increases. “We did observe that there were hotel charges in the Richmond area during fiscal year 2016 and, on average, there was at least one stay per month in Richmond through December, 16, 2017, which is a significant increase over prior periods,” the written report by RRC cited. Former jail Superintendent Donald Hunter retired shortly following a release of th RFC memorandum detailing an overview of the jail’s budget in February. Hunter also serves on the Farmville Town Council as the Ward D councilman. Hunter was appointed superintendent of the jail November 2013, current PRJ Superintendent Jim Davis confirmed. Exhibit A of the report showcases annual spending in categories related to credit card use for travel and other items.

Travel and Lodging, in 2013, had an annual expense of $3,527.67. In 2017, the number increased to $16,031.44. A chart of the 5-year trend in travel expenses shows an annual increase of 85.90 percent in 2015, as expenses jumped from $3,839.27 in 2014 to $7,137.36 in 2015. The memorandum earlier in the year notes that jail employees had 24 overnight stays at the Hilton Garden Inn in Glen Allen throughout the fiscal year ending June 30, 2017, with only three charges including a documented purpose. “You will see that the travel increases from 2013, they were $3,500, and in 2017 they were $16,000 dollars,” Choate said. “So you would think that $3,500 is a reasonable training, traveling, lodging budget for folks going to different conferences, the training academy if they need to stay there, things like that.” Huff added that the audit reflects the increase in numbers. “That’s just a comparison of absolute dollars,” Huff said. “We’re not saying that the training wasn’t used or needed, we’re just pointing out the annual increase went up five times in five years. So it’s accelerating.” Similar increases were seen for an American Express credit card use. The 2013 expense is listed as $26,635.75. In 2017, it jumped to $92,676.16. There were also increased expenses relating to purchases from Sam’s Club that “may exceed ordinary and customary expenditures when compared to similar entities.” Expenses attributed to purchases made at Sam’s Club in 2013 came to $1,091.41. In 2017 it was $4,203.85. Expenses attributed to Walmart came to $5,056.73 in 2013. In 2017, it came to $10,450.30. The credit card for some of the purchases was under the superintendent’s name between 2013 and 2017, which also made it difficult to differentiate who purchased the items, representatives from RFC cited. “Make sure that, going forward, there’s much more available to this board and others when they make the approvals of credit cards, (that) there’s more behind it than just the receipt,” Huff said. Prince Edward County Administrator Wade Bartlett asked the company to provide reassurance that the practice would not be repeated. “We are sure this problem with the lack of documentation will not reoccur, as long as we follow the procedures,” Bartlett said. Huff confirmed this “unequivocally.” PRJ Administrative Assistant Gloria Giles said management contacted the credit card company, and found that the credit card still had points, but there was no evidence that the points had been used. Davis said the jail no longer uses the American Express credit card. During the February Prince Edward County Board of Supervisors meeting Prince Edward County Buffalo District Supervisor C.R. “Bob” Timmons Jr. said he had been given information about inappropriate behavior between a jail supervisor and an employee. RFC representatives said there was no way for them to confirm reasons for the increase in expenses.