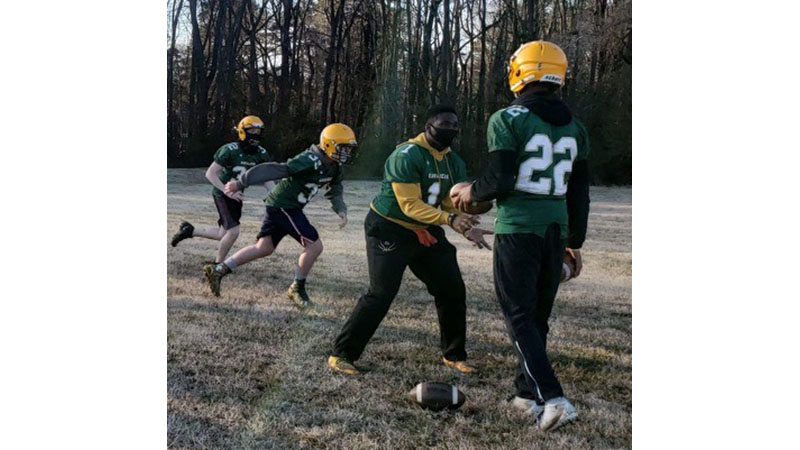 It has been a long wait due to the COVID-19 pandemic, but Kenston Forest School is making its return to the gridiron this week.

The season was originally supposed to open Saturday afternoon, Feb. 20, against visiting Fuqua School, but power outages and inclement weather stopped that from happening.

“We were actually at Kenston Forest School today, the football team,” Kavs Head Coach Joseph Kaiser said Monday, Feb. 22. “We were cleaning up campus, cutting trees, clearing things from the field and just getting things back to normal and had a great practice today, and we’re ready to roll.

“I think it’s going to be a fun season whether we play three games, four games, five games, whatever it may be,” he added. “As long as we get to play some games and these kids get to enjoy themselves as a team, that’s all that matters.”

The schedule is subject to change as Kenston Forest had a game set for Saturday, Feb. 27, but Broadwater Academy had to cancel. With the addition of the game this Wednesday, the Kavaliers’ schedule includes five games. Kaiser said they are looking to possibly get a sixth.

He said the Virginia Independent Schools Football League voted not to hold a postseason for this early 2021 football season.

“This will just be a regular season so the kids can have a season in general,” Kaiser said.

“So we have a nice group of kids,” Kaiser said, adding there is a lot of excitement in the program.

Senior guard Thomas Inge, who is committed to play football at Virginia Military Institute, will be a standout, as will senior running back/quarterback/linebacker Quinton Hawkins, who has multiple offers from Division I, Division II and National Association of Intercollegiate Athletics schools.

“He’ll be committing soon somewhere,” Kaiser said. “It’s come down, really, to three or four options for him right now.”

The coach said the Kavs also have a great quarterback who transferred in from the Chesterfield County area and who starred for Kenston Forest during the recent basketball season — 6-foot-4-inch, 190-pound junior Kendall Thorne.

“Very good kid, very coachable, works hard,” Kaiser said. “He can run like a deer, so I think if he gets to the outside, we’ll be alright.”

The combination of returning talent and impressive newcomers should give Kavalier fans plenty to be excited about, just like it has done so for Kaiser.

“I think we have a good squad, and I think that we’re going to have a lot of success in these next few weeks, which is going to lead to a bright future,” he said.

Kaiser noted the original plan was for Kenston Forest to also have a junior junior varsity (JJV) team, which would feature sixth- through eighth-grade players.

“We had 21 kids on that team,” he said. “Unfortunately, due to COVID we’re only hosting a varsity season, so some of those kids will be doing some flag football on the side, so nothing official, but just to keep them interested, we do work with them once or twice during the week just to keep them on board so when things do return to normal, those younger kids can transition into the varsity program when they’re old enough.

“And that was a goal of mine when I came in was to keep the younger kids in middle school involved in order to keep the program sustainable, and I think it’s working.”