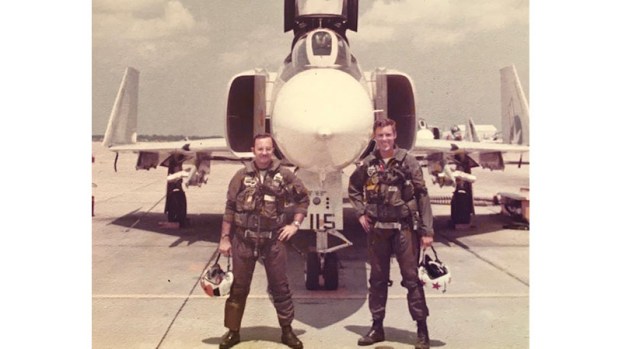 Oliver Wright, left, stands with a squadron mate in front of a F-4 Phantom in August, 1973, while learning to fly. 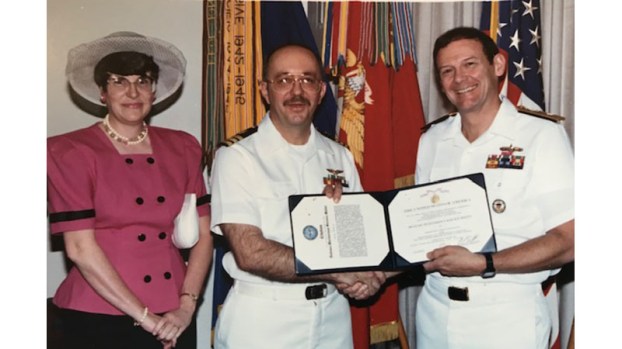 Wright, center, received the Defense Meritorious Service Medal upon his retirement in 1990 from an Admiral from the joint staff. Wright’s late wife, Sue, is pictured at left.

Lunenburg resident Oliver Lee Wright, or “Ollie” as he is known to most, was born into a military family moving across the country six times by the time he was 6 months old.

“My father was a career Navy man, so I grew up in a variety of places,” Wright said. “My earliest memories are of living with my mom and middle sister with my grandparents while my dad was stationed in Japan. When I was 5 years old, we were able to join my father in Japan. I started first grade in the government school on the naval base at Yokosuka, Japan.”

Wright, 74, said because my father was a Chief Petty Officer aviation electrician, he was predisposed to join the Navy.

“And I wanted to work on and fly in Navy aircraft,” he said.

In January 1966, after flunking out of college, Wright said there was a waiting list to get into the Navy.

“If you got drafted before you could join the Navy, you were in the Army and possibly going to Vietnam,” he said. “Fortunately, because my father was a retired chief, I was able to enlist in the Navy on February 28 in 1966.”

Even though college life was not for him, Wright said the best thing that happened to him while he was there was meeting his future wife his last semester before going off to join the Navy.

At the age of 19, Wright headed off to boot camp at Naval Station Great Lakes near Chicago.

“It was a very cold winter with lots of snow, but it was better than being drafted into the Army,” Wright said.

Wright said in addition to learning how to be a sailor, bootcamp provided him a great service.

“I found out what my natural skills (aptitudes) were. When I enlisted, I did well enough on the entrance tests that I was guaranteed a Class A school (career field or rating basic school),” he said.

Wright said during boot camp he was given an extensive aptitude test.

“The classifier said I had done very well on the tests and (asked) what rating would I like to be. I said, ‘Aviation Electronics Technician.’ He said, ‘No you don’t, your electronic scores are OK, but your mechanical scores are much higher. You would be much better suited to be an Aviation Structural Mechanic.’ I realized that he was right, and that is how I got started on the right career path in the Navy,” Wright said.

“Serving in both the enlisted and officer ranks was a very special privilege and gave me a very valuable perspective on the special worth of every individual,” Wright said. “My time in the service was always an honor, most of the time a satisfying pleasure and sometimes very dangerous and scary.”

Early in his Navy career, Wright was assigned to the operational squadron VF-31 “Tomcatters” flying in the F-4 Phantom. In this assignment, he went on two operational cruises to the Mediterranean in the USS Saratoga. During that time he graduated from the Naval Fighter Weapons School, better known as Top Gun.

Wright was later assigned for a second operational tour in VF-31.

During this tour, he made two cruises on the USS Saratoga in the F-4. He participated in the squadron transition from the F-4 Phantom to the Grumman F-14 Tomcat.

Wright made another cruise to the Mediterranean on the USS John F. Kennedy in the F-14. He said this cruise included a trip through the Suez Canal, operations in the Persian Gulf and the Indian Ocean and Australia. During that tour, he attended the Naval Aviation Safety School at the Naval Postgraduate School in Monterey, California, where he was promoted to lieutenant commander.

After some college courses in between, Wright returned for his third operational tour in VF-31.

“I served as maintenance officer on my final cruise aboard USS John F. Kennedy, which was seven and a half months long and involved flying in hostile fire over Lebanon during 1983-84,” Wright said. “During this cruise, I ejected from an F-14 that was about to fly into the water. The story of the incident and the subsequent events is chronicled in chapters one and eight of the book ‘Super Carrier’ by George Wilson.”

After a few more tours, Wright retired on Sept. 1, 1990. In 1995, Wright and his late wife moved to Lunenburg County from Northern Virginia to live on a 100-acre tree farm that they owned jointly with his parents, who had moved to the county in the mid-1970s.

Wright said that in both his military career and in his life he had developed great faith in God.

“I have seen His creation and experienced its majesty in ways that very few are privileged to do,” Wright said. “I have been able to contribute a very small part to the defense of the country I love as a warrior. I have been blessed to have been part of a very highly skilled, high-performance team successfully doing very dangerous, critically essential work that most people haven’t experienced.”

Today, Wright is still serving his community as a member of the Lunenburg Veterans of Foreign Wars Post 9954, and is active in his church, county government, and civic organizations.

To see the full edition Salute to Veterans click here.