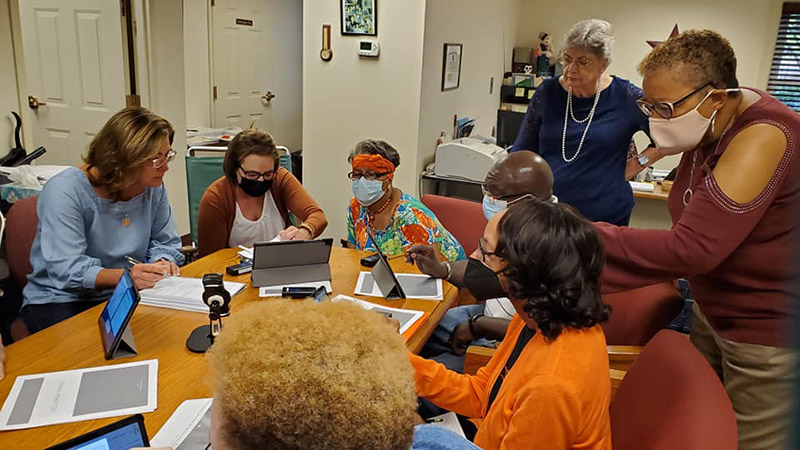 Lunenburg County’s officers of election recently participated in training sessions to learn about the county’s new electronic poll books voters will use during this November election.

With the Nov. 2 election right around the corner, the Lunenburg Electoral Board has been busy conducting training classes on its new electronic poll books for 60 officers of election.

According to Electoral Board Chair Donna Dagner, members took part in 12 training sessions.

This election, officers are being introduced and trained on the use Electronic Poll Books (EPB) participating in a firsthand training.

“They were so excited and some a little nervous,” Dagner said.

Dagner said when voters go to the poll next week they will check in with a scan of the bar on the back of their driver’s license or voter registration card.

Prior to every election, training is provided on greeting voters, checking them in and distributing the paper ballots. Each precinct has the capability to provide service for those voters who are visually impaired, those that need to vote outside the polls, and the officers are trained to collaborate with them.

Officers of election ensure that polling places are set up with for a floor plan that is an easy flow for the voters, that proper lighting is available and that voters with disabilities have easy access.

“An oath is administered to all officers, and they are sworn in with the oath to prevent fraud and deceit,” Dagner said.

According to Dagner, officers of election are appointed by the Electoral Board.

“This prominent position allows citizens to lend a hand in democracy, serving their community, and being an active participant in the electoral process,” Dagner said, “Officers of election are non-partisan and impartial, bound by oath to studiously endeavor to prevent fraud, deceit and abuse in conducting the election.”

For the next 13 hours until polls close at 7 p.m., the officers of election work to make sure things are running smoothly.

Dagner said when the polls officially close, a tabulation tape prints showing the number voters served, the calculation of recorded votes. They must close all the equipment, return the room used as it was upon arrival and deliver the voting equipment to the Registrar’s Office.

Electoral Board members themselves play a big part in how election day is handled.

The Electoral Board members need to be familiar with federal and state laws that must be followed in conducting elections in accordance with the Virginia Election Laws. They must attend mandatory training programs provided by Virginia Dept. of Elections (Elect) and Virginia Electoral Board Association (VEBA). They must familiarize themselves with the Voting Rights Act; the Help America Vote; the National Voter Registration Act; the Voting Accessibility of the Elderly and Handicap and Title II of the Americans with Disabilities Act.

Where you place your vote is even decided by the electoral board and its members.

According to Dagner, the Board approves and recommends polling places within the precincts established by the local government. It also approves the voting equipment to be used and develops and approves a security plan to keep all equipment and materials secure.

“The Board ensures and conducts the Logic & Accuracy (L&A) testing of each piece of voting equipment to confirm that they are programmed correctly for each election and that they are recording votes accurately,” Dagner said.

On Election Day, the three members of the Electoral Board travel from precinct to precinct to observe activities.

They are also directed by the General Registrar to deal with any incidents inside or outside the polls.

The Electoral Board’s job does not end on election day.

The day following the elections, members conduct a post-election canvass to ascertain that all precinct results are accurate and complete.

“Based on the input from the General Registrar, they determine the validity and counting of provisional ballots,” Dagner said.  Their signatures on the certification of results are the ultimate declaration of the truth, accuracy and dependability of the vote totals being submitted to the commonwealth.”