As I was shelving books a few weeks ago, I came across an older title that is part of our collection. “All About the Months” was written by Maymie R. Krythe and published in 1965. Since we were moving into the holiday season, I first read the chapter about December but it was actually the information about January that intrigued me. The month takes its name after the Roman god Janus, who is usually depicted with two faces, one looking to the future and one looking to the past. This may be one of the origins of our custom of setting new year’s resolutions.

I was thinking of Janus when I wrote my last article, looking back over some of my favorite books of 2021. But this time, rather than focus on books to read in the new year, I was thinking instead of the winter season, which is my favorite time to read.

During the snowstorm last week, one of my friends texted to see if I needed anything. I replied: “I’m good. I have books, movies and food.” Later I laughed when I saw the order of these items, but it’s true: books and winter just seem to go together!

Maybe it’s the early evening darkness or the colder temperatures but my focus seems to deepen in the winter and I can tackle books that wouldn’t appeal to me during the other seasons. Sometimes I may be drawn to titles that have winter almost as its own character, such as the Scandinavian thrillers made popular by Stieg Larsson and Jo Nesbo. How about “The Shining”? This book immediately brings to mind a snow-covered landscape and the sometimes sinister emotional isolation experienced in the winter months.

The classic Russian novels “Anna Karenina” and “Doctor Zhivago” take place primarily in winter settings and the descriptions of snowy scenery are beautifully written. One recent book, “The Revolution of Marina M.” by Janet Fitch, borrows from this tradition and places this epic tale and its female protagonist in the midst of the Russian Revolution and the hardships experienced during the winter months in a country at war with itself.

Two books based on actual events feature winter weather as a major plot point. “The Children’s Blizzard” by Melanie Benjamin is set during a horrendous blizzard in 1888 and “Into Thin Air” by Jon Krakauer is based on a disastrous expedition on Mount Everest in 1996. Both of the books feature nail-biting suspense and the tragic consequences of underestimating how quickly weather can change.

If you prefer reading about winter in a more metaphorical sense, “Wintering: the Power of Rest and Retreat in Difficult Times” by Katherine May is an excellent treatise on the transformations that can take place during the fallow times of our lives and the promise of renewal that beckons us forward.

Julia Spencer Fleming has written a series of mysteries that have been extremely popular with our patrons. Set in upstate New York and featuring characters Claire Fergusson, an Episcopal minister, and Russ Van Alstyne, a police chief, the books frequently have snowy scenes but more often feature the psychological aspects of winter. Uncovering things that are hidden and confronting the starkness of emotional terrains are all explored by these two complex characters.

If winter is just not your season, take a cue from Janus and look forward to warmer weather and summer beach reads.

Holly Howze is the branch manager for the Ripberger Public Library located in Kenbridge. She can be reached at lcplsbooks@ gmail.com. 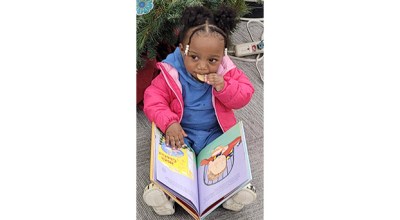