SVCC lets late lead get away 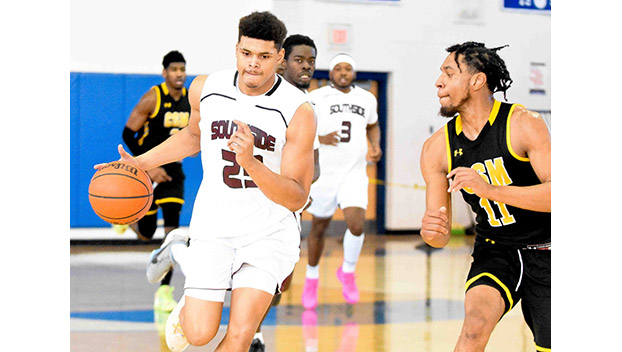 (Photo by SVCC) SVCC’s Xavier Copeland pushes the ball in action against the College of Southern Maryland in Lawrenceville on Saturday afternoon.

The Southside Virginia Community College (SVCC) men’s basketball team let a late lead get away and dropped its second straight game after falling 78-65 on Saturday afternoon to the College of Southern Maryland (USM).

The loss dropped SVCC to 8-4 on the season.

The local team fell behind early but got a trey from DeAndre Miles to close the margin to 22-21 at the 5:16 mark of the first half.

A dunk by Miles and a runner in the paint by Xavier Copeland late in the half helped SVCC to cut the Southern Maryland lead to 35-32 at the halftime break.

A dunk by Miles and a floater by Isaiah Thompson gave SVCC a 63-59 lead at the 6:15 mark but the visitors closed the game on a 19-2 run to claim the victory.

Miles led SVCC with 20 points and 12 rebounds while Holmes added 16 points and five rebounds and Thompson finished with 13 points and three assists.