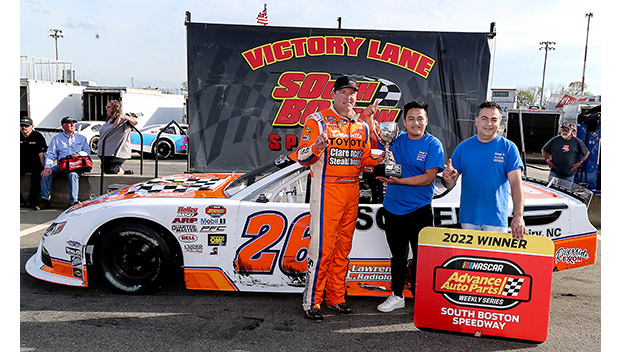 The Bahama, North Carolina resident muscled his way past Sellers on the final lap of the opener to take the win, leaving Sellers to have to settle for second place after having led all but the final lap. Landon Pembelton of Amelia, finished third with Kyle Dudley taking fourth place and Thomas Scott of Efland, North Carolina rounding out the top five finishers.

“If you had asked me six months ago if I could do this, I would have said it was never possible,” Riggs said after the victory that stretched his win streak to four in a row.

“I was faster than he was in the first race. I got a nose inside and he tried to chop me off. I was there and he couldn’t deny me. I ran my line and did what I could.”

Sellers said he and Riggs raced each other hard and he was simply trying to do what he could to try to win the race.

“He (Riggs) kept me loose up off of the corner several times. He was doing what he had to. I just pinched him pretty hard trying to knock some momentum off to try to get the win and it didn’t work out.”

Sellers started eighth in the second race as the top eight finishers of the first race were inverted for the start of the second race. Riggs, by virtue of the track’s handicapping system for drivers that win two or more races in a row, started mid-field in 12th place.

It took little time for them to get to the front, with Sellers taking the lead from Jacob Borst on the 14th lap and Riggs climbing into second place by passing Borst on the 26th circuit.

Two caution periods in the last 37 laps gave Riggs opportunities to start alongside Sellers on the restarts. Sellers surged ahead of Riggs on both restarts and held onto the top spot to take the win. Borst, of Elon, North Carolina, finished third, Mason Bailey finished fourth and Scott finished fifth.

“It really hasn’t been that long, but it feels good to be back in Victory Lane,” Sellers remarked.

“We struggled a little bit out of the box this year. We got a win last week at Dominion Raceway and we picked up a win here. We’re looking forward to the rest of the season. We have fast cars. We just have to get them ironed out.”

Riggs noted Sellers had the faster car in the second race.

“He (Sellers) deserved to win this time,” Riggs pointed out.

“He was faster than we were. He had clean air and had a good car.”

The race was a highly competitive race with two lead changes among three drivers.

Barnes held off fast-closing J.D. Eversole of North Chesterfield, in a five-lap dash to the finish that followed the last of the race’s four caution periods to take the win.

Justin Dawson of Nathalie, Virginia finished third with Chris Donnelly finishing fourth and Jason Myers of Hurt, rebounding after being involved in a mishap earlier in the race to finish fifth.

A bit of history was made in the event as Myers and his father, former division champion Billy Myers of Hurt, started the race together on the front row, marking the first time a father-son duo had started on the front row for the start of a race in the division at the speedway.

Layne scored a flag-to-flag win in the opening 15-lap race to score his second win in a row. Scott Phillips of Halifax, Bruce Mayo of Halifax, Reaves and Jack Milam of Keeling, rounded out the top five finishers.

Reaves took the lead with two laps to go when Layne encountered misfortune while leading the second race and held off Mayo and Phillips to score his first career win. Milam and Jimmy Wade of Halifax, rounded out the top five finishers.

Kendall Milam of Keeling, took the lead from former division champion Kevin Currin with seven laps to go and won the 20-lap Hornets Division race to score his first win in the division.

Milam dedicated the win to his grandmother, Joan Milam, who passed away last week.

NEXT RACE AT SOUTH BOSTON SPEEDWAY

South Boston Speedway will go under the lights for the first time this season for two nights of racing featuring the Must See Racing winged 410 sprint cars, in the Sentara Healthcare American Sprint Car Weekend on Friday night, April 29, and Saturday night, April 30.

Friday night’s racing action starts at 8 p.m. and will include a full program of racing for the Must See Racing winged 410 sprint cars (heat races, B-Main and feature) as well as races for the USAC Eastern Midgets and South Boston Speedway’s Budweiser Limited Sportsman Division, Southside Disposal Pure Stock Division and the Hornets Division.

Starting at 7 p.m., Saturday night’s action will include a full program of racing for the Must See Racing winged 410 sprint cars (heat races, B-Main and feature), a race for the USAC Eastern Midgets, twin 75-lap races for the NASCAR Advance Auto Parts Weekly Series Late Model Stock Car Division and a race for the Southern Ground Pounders Vintage Racing Club.

Single-night tickets at the gate on race night are priced at $20 each.