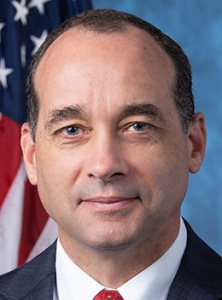 For two years the government has printed and borrowed trillions of dollars, over regulated and locked down the economy, seized more control over our lives, and trampled on our freedoms with unconstitutional mandates – all in the name of COVID. The results of this unprecedented government intrusion have been devastating, but sadly predictable.

The national debt has surpassed $30 trillion, or $90,000 for every man, woman and child in America. Inflation is at a 40-year-high high of 8.5% and is punishing family budgets with higher costs on everything from the gas pump to the grocery store. Our supply chains have been disrupted, and in the first quarter of the year, the economy actually shrank by 1.4%.

Rather than putting an end to their demonstrably failed policies, President Biden and Speaker Pelosi continue to try to pass elements of the so-called Build Back Better bill, at a total cost of $5 trillion. What would be more accurately called Build Back “Bankrupt” would create 150 new government programs. Worse than an ill-advised one-time massive expansion of the federal government, this would be the most radical socialist spending spree in history.

Over the last two years, the Biden administration has spent $3.6 trillion in the name of COVID, or more than $10,000 per American citizen. How many Americans would have chosen to add $10,000 to their share of the federal debt tab in return for this spending? Beyond that, few may realize that some of that money has actually been used to fund things like the Broward hotel project to build an upscale hotel in Fort Lauderdale. In fact, cities across the country used COVID relief funds to build libraries, construct sport’s complexes, and plant trees.

The Biden Administration has also extended the “COVID pause” of student loan debt repayments, at a monthly cost of $4.3 billion to taxpayers, and seems intent on ultimately canceling the entire $1.6 trillion total. In addition to adding another $5,000 per American to the national debt, this action would require the working class to subsidize the education of the elites at expensive Ivy League schools. It is immoral to require those who didn’t go to college, those who worked their way through school to avoid debt, or those who paid their student loans, to all absorb the debt load of college graduates with higher earning potential. How unfair to make middle-class families who saved and sacrificed to help their kids pay for college, now have to pay for others as well.

This action would do nothing to address the root cause of soaring exorbitant college tuition costs, and it would create an expectation for similar action for future college expenses for today’s aspiring college students. To stop this poorly conceived action by the Biden Administration, I introduced the Federal Student Loan Integrity Act, which would prevent an extension of the moratorium on student loans. And, as member of the Education & Labor Committee, I am fighting against the effort to cancel student debt altogether.

When I first ran for Congress in 2020, I identified Washington’s reckless spending policies as one of the three biggest threats to our future, along with illegal immigration and our broken education system. After being elected, I joined the Republican Study Committee’s (RSC) Budget Task Force and helped write a balanced budget proposal. Last year, I drafted the Nickel Plan, which would cut five cents from every dollar Washington spends until we balance the budget. Most recently, I introduced the Less Is More Resolution to change the rules of the House of Representatives. It would require any bill that proposes a new federal program to eliminate two or more programs at equal or greater cost.

Virginians want politicians in Washington to start using common sense when it comes to spending, and to restore fiscal sanity to the federal budget. My proposals to balance the budget and shrink the size and scope of government would ensure we put our fiscal house in order. We owe nothing less to future generations.

Bob Good represents Virginia’s 5th Congressional District and is serving his first term in the 117th United States Congress. He can be reached at (434) 791-2596.

Tommy Wright : Time to get back to work

Frank Ruff Jr.: How can our region lead in skills training?