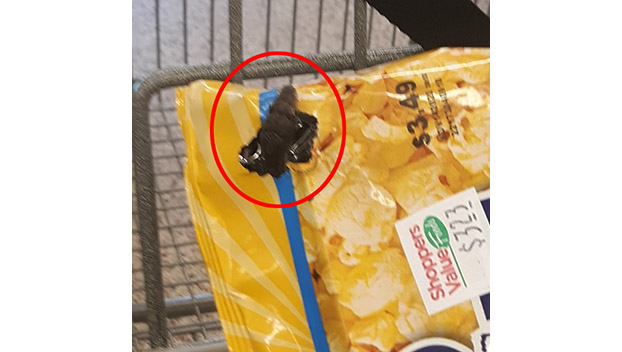 Kimberly Slaughter snapped this image of a snake inside a popcorn bag in Shoppers Value in Kenbridge.

A Kenbridge woman says she will not be returning to Shoppers Value after a snake popped its head out of a bag of popcorn.

Kimberly Slaughter was shopping at the Kenbridge Shoppers Value around 5 p.m., Thursday afternoon, July 28, when she picked up two bags of popcorn from the bottom shelf.

“When I picked up the two bags, I noticed that they had mouse feces on them, so I just put them back and grabbed another bag and tossed it in my cart,” Slaughter said. “I then noticed a hole in the bag, so I was on my way to take it up front to let someone know when the snake’s head popped out.”

Slaughter, who said the store’s bottom shelves and floors have mouse traps, told a cashier that there was a snake inside the bag.

“She called for a manager,” Slaughter said. “When the manager came over the snake came out of the bag, went down the cart, and then back inside the bag.”

Slaughter said a customer and the manager were able to close the popcorn bag and dispose of it inside a grocery bag.

“The manager just took the bag to the back and never said anything to me.”

Slaughter said she doesn’t want to see the grocery store shut down because it’s the only one in the town, but it does need to be cleaned up.

“This is very serious, and they are just brushing under the rug,” Slaughter said.

Store managers at Shoppes Value did not return a call to The K-V Dispatch.

Slaughter said her concern is for other shoppers. “I have a small toddler, and if my toddler had been in the cart and grabbed the bag of popcorn, the snake could have bitten him,” she said. “What if it was another kid who grabbed the bag off the bottom shelf or an elderly person?”

Slaughter said she reported the incident to the local health department and the Virginia Department of Agriculture and Consumer Services (VDACS).

According to VDACS, which has regulatory oversight of supermarkets, groceries, and other retail food stores in the Commonwealth of Virginia, complaints are typically received by the agency from consumers who have encountered food related concerns when shopping at a retail food store.

“When the Food Safety Program receives a complaint on a retail food store, an agency food safety specialist is immediately dispatched to the firm in question to perform an investigation,” said Karin Taylor with VDACS Office of Communications. “If necessary, and depending on the severity of the complaint, a complete inspection of the store may be performed by the food safety specialist in conjunction with the complaint.”

Taylor said the firm is required to correct any violations encountered during the complaint investigation and/or subsequent inspection.

Taylor did not say if an inspection of Shoppers Value in Kenbridge has been conducted.