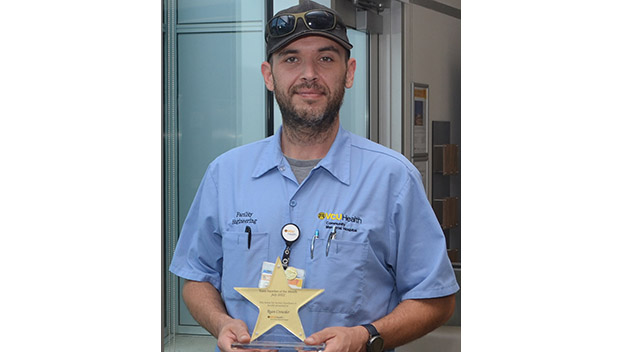 Ryan Crowder of La Crosse, won the VCU Health Community Memorial Hospital July Team Member of the Month award for his STAR (Safety, Teamwork, Accountability and Relationships) service. Crowder has worked at VCU Health Community Memorial Hospital for one year and is a facility engineering technician. He came from Fort Lee, where he held a similar position.

“Ryan is a team player,” said Rodney Clarke, facility engineering supervisor. “He is always willing to go beyond the basics to complete tasks.”

His nomination form described several instances when Crowder took initiative to improve the look of the cardiology clinic and waiting area. He is great about communicating changes and working with the staff to minimize the impact to patients. His friendly nature and hard work are getting noticed.

“I couldn’t believe it,” Crowder said. “It felt good to be recognized.”

His advice for his co-workers is to treat everyone the same.

“Whether I’m talking with the president or the janitor, I treat everyone the way I would want to be treated,” he said.

Crowder and Victoria Houp, a dental hygienist at CMH Family Dental Services, have a three-month-old baby girl. When he’s not working, he enjoys spending time with family, working on his trucks and playing with his two huskies.

Crowder received the STAR service award, STAR pin, a parking tag that allows him to park wherever he wants for the month of August and a $40 gift card.

Other employees nominated in July were Sarah Carlton in labor and delivery, Bryan Mosora, D.O., in the emergency department, Jaimee Newcomb in acute care, Kristan Price in the intensive care unit, Desiderio Rimon, M.D., in surgical services, and Ashley Willis in oncology.