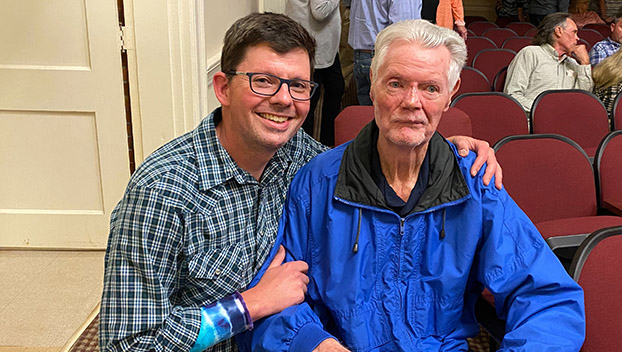 Mark Wallace and Carolina Connection performed on Saturday, Sept. 24 at the Kenbridge Town Hall Auditorium. The performance was a fundraiser for the Kenbridge Recreation Center gym renovations and repairs. According to the Kenbridge Recreation Committee, over 100 people attended the event. Vocals included favorites such as Angel Band and Rolling in My Sweet Baby’s Arms. Based on letters home, an original song by Mark Wallace entitled “1954” about his Dad, Wiley Wallace, and Wiley’s twin brother Will joining the Navy as boys and returning as men in 1958 was a special moment as Wiley was present for the show. At right are Mark and his Dad, Wiley P. Wallace.