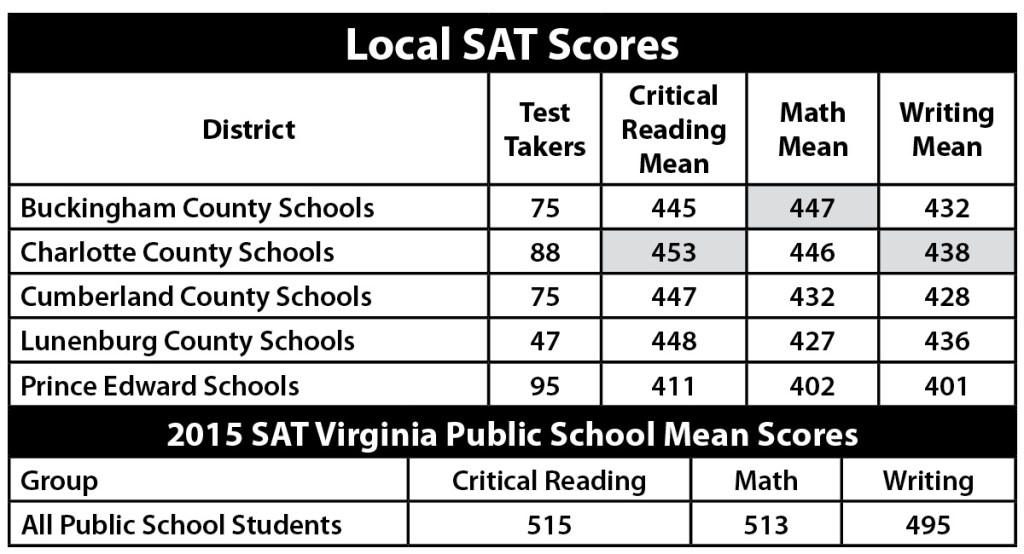 Mean SAT scores vary across the area with Prince Edward scoring the lowest overall and Charlotte the highest, while Lunenburg falls only one spot behind Charlotte in two subjects. Gray indicates the highest score in the region.

Although Lunenburg County Public Schools only had a total of 47 test takers for the SAT, mean scores of 448 in critical reading and 436 in writing were second highest in the area. However, Lunenburg students fell slightly behind in math with a mean of 427.

Lunenburg County Public Schools were only second to students in Charlotte County, who led the way of the reviewed localities with an impressive mean score of 453 in critical reading, 446 in math and 438 in writing.

On the other end of the spectrum, Prince Edward County High School’s SAT scores from last year ranked as some of the lowest in the area.With a 411 mean critical reading score, a 402 math mean score and 401 writing mean, the average SAT score only totaled to about 1214. There were a total of 95 test takers participating in Prince Edward last year—the greatest amount of counties The Herald reviewed.

Dr. David Smith, superintendent of Prince Edward County Public Schools, explained that Prince Edward encourages as many students as possible to take the SATs. He said the the division’s having the highest mean score in the VDOE’s Region 8 for the PSAT is a good indication of improvement in the future.

A recent release from the Virginia Department of Education (VDOE) explained, “The College Board, which publishes the SAT, reported today that the average scores for public school graduates in the commonwealth rose by one point in mathematics, by two points in writing and held steady in reading. Nationwide, achievement declined in all three subjects on the SAT.”

The VDOE said that Virginia’s public school mean score in reading was 515, 513 in math and 495 in writing. Scores reviewed included the localities of Prince Edward, Charlotte, Lunenburg, Cumberland and Buckingham.