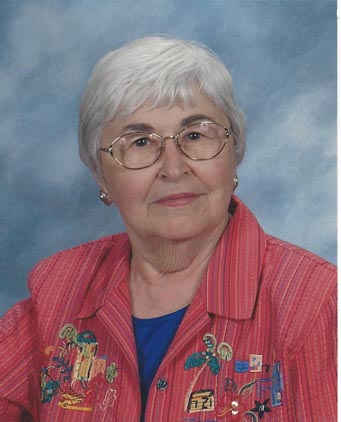 Thelma Woerner Hall, 91, of Victoria, Va. died peacefully in her home on September 30, 2015. She was preceded in death by her husband Whit B. Hall, Jr. and her son John B. Hall.

Thelma was born in Phoebus, Virginia, and spent her childhood in the Hampton/Newport News area. After marrying Whit, the couple made their home in Victoria. Thelma was well known as a floral designer at the local florist when it was under the names of Loves Florist and Estes Flowers. She was a particularly talented cook and loved having friends come in for dinner or for just a good cup of coffee. Thelma was an avid reader, and she could solve every Freecell that came her way. In addition to her many talents, Thelma was a faithful member of Victoria United Methodist Church. She had a gentle faith that witnessed through her ability to listen and leave one feeling more at peace. Her last words were of Jesus.

Thelma is survived by her daughter Jenean Hall of Onancock, Va., her daughter Janice Thompson and son-in-law Ken Thompson of Kilmarnock, Va., and her grandson Beno Thompson of Boston, Ma. She is also survived by a dear brother and sister-in-law, Bob and Betty Woerner of Newport News, and loving sisters-in-law Rosemary Quelch of Fort Myers, Fl., Beverly Waguespack of Matoaca, Va., and Ann Jabora of Blackstone, Va. Thelma dearly loved her many cousins and her nieces and nephews. Last, but not least, she is survived by loving friends, young and old, in whom she delighted.

Funeral services were held on Friday, October 2, at 2:00 p.m., at Victoria United Methodist Church where the family received friends one hour prior to services. Please consider memorial donations to Victoria United Methodist Church. Interment in the Lakeview Cemetery, Victoria. Staples Funeral Home, Victoria in charge of the arrangements. Online condolences may be sent at: www.staplesfh.com