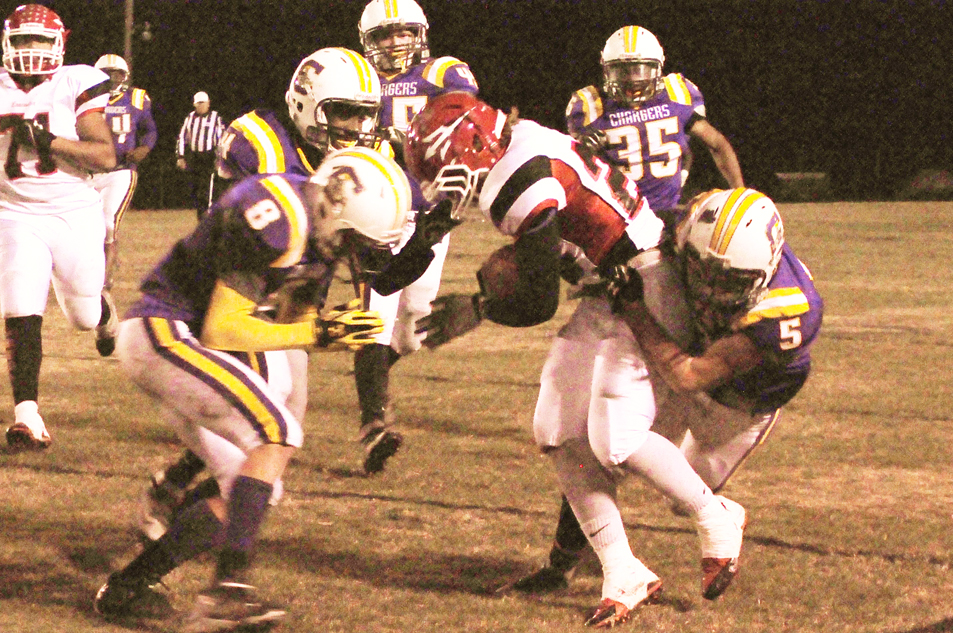 Central High School made it look easy Friday night in the first round of the Virginia High School League Group 1A East Region playoffs.

The Chargers racked up 440 rushing yards — and added an opportunistic 94 through the air — in a 41-8 trouncing of Lancaster.

Central, 8-3, travels to Franklin next Friday for a second-round playoff game. The Broncos, 7-2, had a first-round bye in the playoffs.

Senior tailback Keaun Baskerville ran for 195 yards and had a touchdown on 13 carries, while junior running back Deshawn Moore added 144 yards and two touchdowns for Central, which led 34-0 at halftime and rested its starters for most of the second half.

“We came out and played with a little fire,” said Central head coach Will Thomas. “The last couple of times, we kinda came out flat. We had a pretty decent week of practice considering all of the rain and mud. We came out playing fired up. We moved the ball and burned the clock.”

While Baskerville gets most of the workload in the Chargers’ punishing ground attack, it was Moore who punched the visitors early in Friday night’s contest.

He capped Central’s first two drives with touchdown runs of 12 and 17 yards, both times breaking tackles inside the 10-yard line and dragging defenders into the end zone.

“I just put my head down and run,” Moore said, acknowledging that he is often the beneficiary of opposing defenses’ focus on Baskerville. “They don’t know to expect me. I say, ‘Yeah,

y’all keep thinking about No. 1 (Baskerville).”

Thomas said Moore “doesn’t have the speed” of Baskerville, “but he’s tough” and, like Baskerville, gets big help from “the hogs up front.”

“We didn’t pass much, but when we passed, we were efficient, and that’s what we want to be,” Thomas said. “Josh put the ball on the money. Josh is kinda the glue. He’s always there. He keeps on going. When we need to pass, he’s on it.”

On the long touchdown, Scott caught the ball on a fly pattern around the Lancaster 45, ran back to the middle of the field, then cut back outside, leaving a couple of defenders in the dust en route to the end zone.

Thomas called Paynter’s other completion “phenomenal.” He hit 6-3, 180-pound junior Raymond Alexander in stride on a 21-yard out pattern late in the first half. The officials ruled that Alexander stepped out of bounds inside the Lancaster 1, setting up Baskerville’s only touchdown of the night, a burst off the right side that put the home team up 34-0 with 37 seconds left before halftime.

“The defense played well,” Thomas said. Lancaster “throws the ball a lot, and they have some shifty backs. Our secondary did a good job.”

Franklin, which has won two Group A state championships in the last 12 years, prefers, like Central, to keep it on the ground.

“They’re good,” Thomas said of the Broncos. “They’ve got speed, and they’re physical. We’ve got our work cut out for us.”

The Chargers expect to have back junior standout Malik Foster, who has missed the last three games with an ankle injury.

“We had him if we needed him in an emergency tonight, but we’re letting that ankle heal up,” Thomas said.