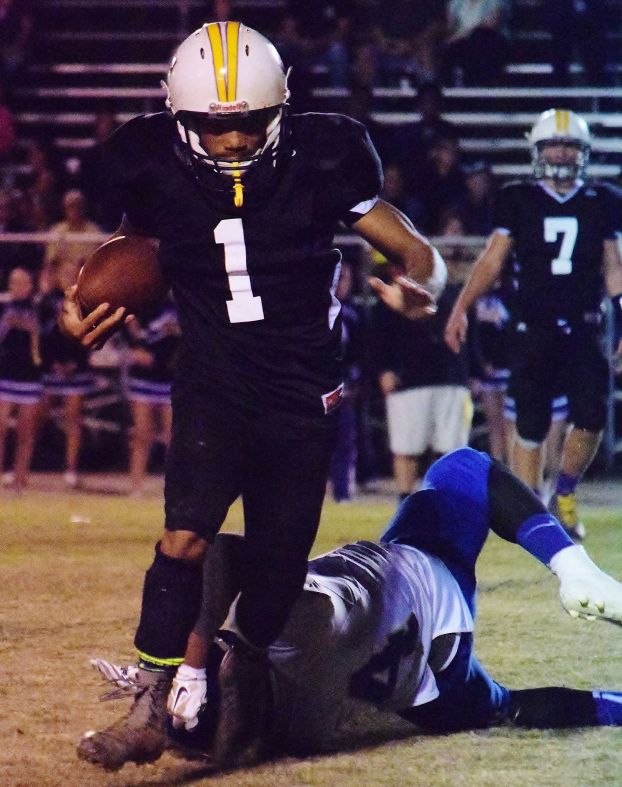 (Photo by Joe Moore) Central’s Keaun Baskerville carries the ball, while a Cumberland player tries to catch him.

After watching visiting Cumberland score the first touchdown of the game on Senior Night, the Central Chargers kicked their performance into the next gear and roared back to defeat the Dukes 48-14.

With the win, the Chargers (7-3)  finished as the No. 6 seed in the VHSL 1A East region and will host their first playoff game at 7 p.m. Friday against Lancaster (5-5).

“We messed up in the beginning and hats off to Cumberland for their performance,” said Central head coach Will Thomas. “They came out here ready to win and didn’t roll over. We didn’t take care of things and played flat at first. They stopped us on the first drive and made us adjust.”

Keaun Baskerville and Dashawn Moore scored first-half touchdowns that stole the lead from Cumberland. Baskerville score on a 25-yard run, while Moore had a 10-yard run and a 30-yard run. Both scores were followed by Ben Atkins extra points.

Baskerville had two more touchdowns in the game, on 15- and 10-yard runs. Jamori Pegram finished the night with a 40-yard touchdown, while Alexander Raymond notched a 15-yard touchdown reception thrown by Josh Paynter.

“We have to get well … we had cases of appendicitis, a broken arm, a broken foot, a high ankle sprain and maybe a collar bone broken after this (Cumberland) game,” said Thomas. “They have played through it and played hard. It has just been a crazy year. We lost our fullback in the first three minutes of the first game of the year.”

The Chargers’ first state playoff game against Lancaster is the first of four rounds leading up to the state finals.

According to VHSL-Reference.com, the last time the Chargers met Lancaster was in the first round of the 2013 playoffs. Central defeated Lancaster 49-21 and went on to defeat Washington & Lee 28-19 in the next round before being knocked out of the bracket by Essex in a 31-6 loss.

If Central wins on Friday, it will have a chance to host a second-round game. However, if William Campbell (No. 5, 7-3) defeats Colonial Beach (No. 12, 3-6) on Friday, the Chargers would have to travel to William Campbell for their next playoff game.

Central High School made it look easy Friday night in the first round of the Virginia High School League Group... read more