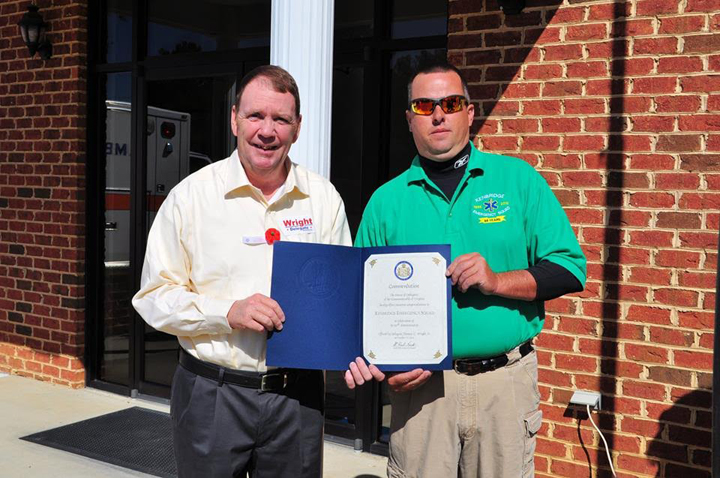 The Kenbridge Rescue Squad celebrated 50 years of existence in mid-October with an open house that included a display of equipment, a car show, blood pressure screening, ambulance rides and face painting.

That evening, there was an anniversary dinner attended by past and present members, families of members, and other guests.

The community’s attendance at the open house exceeded expectations, especially considering that the event was in competition with a number of other regional activities, said Rodney Newton, the squad’s administrator.

It was a good day for a squad that has had a difficult year.

In late September, Newton was hired to oversee a reorganization of the Kenbridge Emergency Squad Inc.

A joint statement by the Kenbridge Town Council and Lunenburg County Board of Supervisors announcing the move said Newton’s duties include reinstatement of its 501(c)(3) tax-exempt status, revision of its by-laws, increasing membership, improving call response times, implementing financial policies, and retaining grants from the state. Newton, chief of the Victoria Fire and Rescue Department, assumed the position effective Tuesday, Sept. 22, the statement said.

Changing demographics leading to many people working out of town, coupled with increased regulation, has led to a shrinking pool of volunteers for the department – a problem not unique to Kenbridge.

Newton recently told members of the Kenbridge Town Council how he has been busily trying to right the lisping ship.

Two of the three years of form 990s — the annual report certain federally tax-exempt organizations must file with the IRS — have been submitted, and the departments hopes to have its exempt state reinstated within several months, he said. If the 990 tax exempt status is reinstated by spring 2016, he hopes the department will be able to use a $176,400 Virginia Department of Health Office of Emergency Medical Services Rescue Squad Assistance Fund grant that was awarded July 1, 2015 to help purchase a new ambulance, stretcher, and load system to assist in loading the stretcher into the ambulance. The grant would cover approximately 80 percent of the new equipment’s cost.

Meanwhile, members of the squad met recently. “A majority — approximately 10–15 — of the members attended the meeting last month and are continuing to work to provide the best emergency medical coverage to the citizens of Kenbridge and surrounding Lunenburg County,” Newton said.

In September, the squad answered 61 calls for assistance, and 60 of them were answered by the Kenbridge squad. One of the calls was answered by another EMS agency. Often, he said, that is the result of the local squad already being out on another call.

It takes an amazing amount of dedication to do emergency medical volunteer work in your community, said Rodney Newton, who works with the rescue squads in Kenbridge and Victoria.

An EMS call requiring transport to a local hospital takes a volunteer away from home, on average, for at least two hours, Newton said.

“An EMS provider that has the ambition to continue their education to provide a higher level of care, Advanced Life Support, must attend class at an accredited training facility,” he said. “The only such facility in Southside Virginia is through Southside Virginia Community College.”

For a provider to attain the level of Emergency Medical Technician – Intermediate requires two semesters of college classes along with clinical experience.  And to continue on to the paramedic level requires an additional year of class and clinical experience, he said.

Now, Newton said, it is time to take a “hard look at coverage.”

“Currently coverage is provided during the daytime primarily by paid EMS staff and in the evening and night hours by volunteers,” Newton said. “The current system of assigning EMS personnel to teams that are responsible for providing volunteer EMS staffing will be evaluated to attempt to offer the best solution to provide care to the citizens.”

Transports often take volunteers away from home for hours at a time, and additional training can take from six months to a year, he said.

Church and Community Events for the week of Sept. 28