Photo by Ellie Richmond Central High School senior Malik Foster, No. 17, runs through a hole opened up by the Chargers offensive line and Keenan Anunay, No. 1, with Jackson Dalton, No. 7, about to put a block on another defender for visiting Bluestone High School on Friday night. Foster had a monster night to help Central win 35-14 on the school’s 50th homecoming.

Central is golden in win over Bluestone

At first it looked like the visiting Bluestone High School varsity football team might spoil the game that was part of Central’s High School 50th anniversary homecoming celebration Friday.

The Barons ran the opening kickoff back for a touchdown, but Central ensured it would own the night, roaring back and claiming a 35-14 victory.

“Bluestone played us tough, their (quarterback) is very good and they made some big fourth-down plays,” Chargers Head Coach Will Thomas said.

Bluestone senior quarterback Tevarius Brooks has deservedly drawn attention from opposing defenses on a weekly basis, and Central has a versatile playmaker who has established a similar reputation — senior running back Malik Foster. 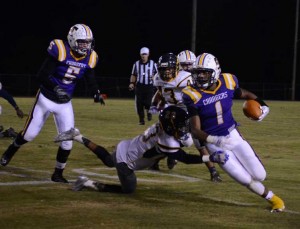 Photo by Ellie Richmond
Central High School junior Keenan Anunay tries to round the corner against the defense of visiting Bluestone High School on Friday.

Foster ran for a 6-yard touchdown in the first quarter, a 9-yard score in the second and 1- and 3-yard scores in the fourth.

Junior Keenan Anunay was another key difference-maker for the Chargers, carrying the ball 28 times for 182 yards.

Sophomore Jackson Dalton accounted for Central’s other touchdown, scoring on a 1-yard run in the third quarter.

Senior Chris Fowler had nine tackles and one sack, senior Dion Graham had six tackles and two sacks and junior John McGrath had his first interception of the year.

The Chargers improved to 6-1 this season and are ranked fourth in Region 1A East with a secure hold on a playoff spot and in position to host at least one playoff game.

Central faces a sizable challenge Friday at 7 p.m. when it takes on host Goochland High School, which is 8-0 and has outscored opponents 291-47 this season.

By John Allen The Kenston Forest varsity football team made its long road trip to Manassas pay dividends as it... read more