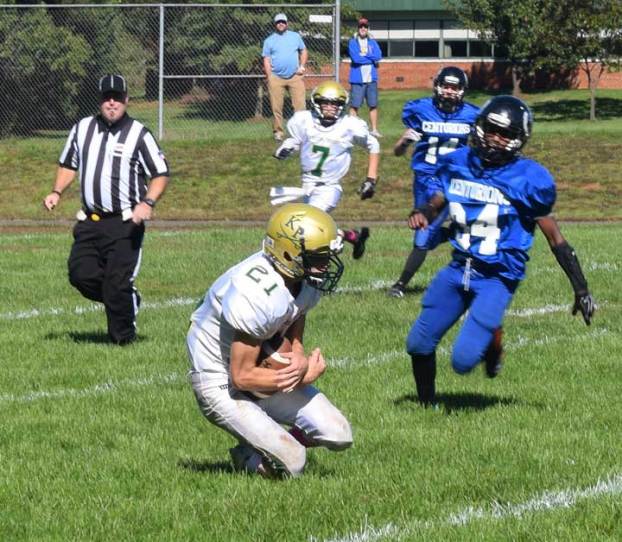 The Kenston Forest varsity football team made its long road trip to Manassas pay dividends as it defeated the NOVA Centurions 35-3 and brought its record back above .500 for the season.

The Kavaliers line dominated the game, opening opportunities for running backs as well as shutting down the Centurions’ offense. All five of the Kenston Forest linemen — Cole Hagaman, Tripp Jones, Thomas Hunter, Thomas Inge and Will Kreis — were outstanding, offensively and defensively.
The Kavaliers kicked to NOVA to start the game and held the Centurions to a three-and-out. Kenston embarked on an 11-play, 75-yard ensuing drive resulting in a 2-yard touchdown run by senior J.E.B. Buchanan, setting the tone for the game.

The Kavs scored three times in the second period. The first touchdown came on a 3-yard run by Buchanan, the second came on a 6-yard run by freshman Elijah Warner and the third score came on a 13-yard strike from senior Tyler Daniel to senior Paden Lawson.

The score at the half stood at 28-0 in favor of Kenston. The Kavs’ defense held NOVA to one first down and less than 40 yards in the first half.
In the third quarter, the final Kenston score came on a third-and-long play from the Centurion 35-yard line. Warner took a screen pass from Daniel and raced down the sideline for a 65-yard score.
Junior Zach Dunnavant was perfect with five extra point conversions.

For the game, the Kavaliers gained 162 yards rushing and 156 passing. Buchanan led all ball-carriers with 104 yards on 13 attempts and scored two touchdowns. Daniel was 7-for-9 passing for 156 yards and two touchdowns.

Defensively, the Kavaliers intercepted four Centurion passes: senior Jackson Taylor had two, Buchanan had one and sophomore Sam Hodges had one. Daniel recorded eight tackles to lead the team.