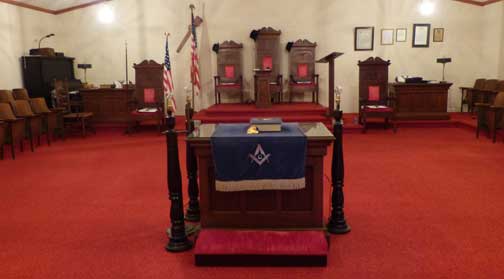 The interior of Victoria Masonic Lodge 304 is a rare sight for the public. For the first time, the Grand Lodge in Richmond proclaimed all lodges should hold open houses during October. Victoria’s lodge held its open house Monday.

As part of a month-long celebration of Masonic Lodges across Virginia, Victoria Lodge 304 held an open house Monday evening. The open house was in response to a proclamation made by the Grand Lodge in Richmond.

The open house — a first-time event for Virginia lodges — is to give the public to a chance to engage with the chapters, educate themselves about the fraternity and encourage men to join who may have interest in Freemasonry.

“A lot of people become Masons to become better men,” Glen Hutchinson, a Mason since 2009, said during the open house.

He said the Victoria chapter is interested in educating a younger generation who might be interested in the craft of Masonry and hopes to gain a few new members in the upcoming year.

Hutchinson described the purpose of Masonic lodges as a place for members to study the Masonry craft, work on personal development and to find peace. As a whole, members are able to come together to better themselves as men, and also help their local communities, he said. Men who are a part of the organization have a sense of belonging, to have a place where they can feel safe, grown and proper, Hutchinson said.

Since Masons do not extend invitations to non-members, those interested must ask to join. Hutchinson said the Victoria Lodge hopes the open house may have sparked curiosity for future members and encouraged them to step forward about interest in Freemasonry.

For more information on Freemasonry in Virginia, visit www.grandlodgeofvirginia.org.