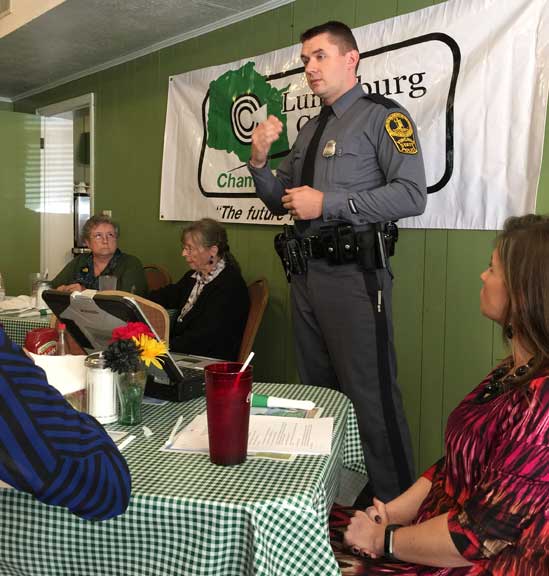 Small businesses experience fraud more often than large businesses, according to Virginia State Police (VSP) Trooper Justin Kempo. Kempo made the remark during a presentation to the Lunenburg Chamber of Commerce during its Thursday meeting.

According to 2014 statistics Kempo cited, there were 154,000 cases of fraud affecting small businesses with 100 or fewer employees, compared to 128,000 cases for larger businesses.

First, he said, businesses must understand why they’re targeted. Reasons include there being fewer employees on duty to spot and identify perpetrators, availability of resources and the fact small business owners tend to hire people they — despite the fact those people may hold grudges against them.

“However, having a small shop should not mean that security should be any less,” Kempo said. “Just being aware can help.”

There are signs to watch for, he said, such as employees living beyond their means or having unusually close associations with vendors or customers. Kempo suggested managers, employees, auditors and others should be trained to recognize these and other warning signs that might invite fraud.

Yet, Kempo said approximately 87 percent of most occupational fraudsters have never been charged or convicted of a fraud-related offense. For whatever reason people commit fraud, many of them have clean criminal and employment records.

Kempo suggested making sure there is enough supervision to keep products from being exchanged between distributors and employees, not allowing truck drivers to load or unload their own trucks and not issuing keys to employees for places where valuables are stored. Also, he said, placing cash registers and cashiers near windows may deter theft by increasing exposure and the risk of being caught.

“Crime prevention is not only about police trying to stop crime, but also about business owners taking measures to help police help them,” Kempo said.

He also suggested protecting computer systems internally from employees and externally from the general public by having secure internet connections and internal network systems.

“One of the best ways to prevent cybercrime is to set up firewalls, and install anti-virus software and keep it up to date,” Kempo said.

He said to hire responsible and trustworthy individuals by screening applicants using reference checks, background checks, personal character examinations, police reports and other examinations. Once an employee is hired, set standards for them to follow. Make sure the rules of the business are understood and strictly adhered to. Explain and train employees on crime prevention and what security programs you have. Make sure they recognize staff and know what to do in case of a robbery.

• Making sure a security system works, knowing how it works and to retrieve its data.

• Shoplifting is a big concern — watch for people carrying large bags and pocketbooks and those who avoid crowded stores and aisles; merchants should supervise dressing rooms; and businesses should plan and plan layouts with surveillance, lighting and low displays.

• Burglary — make it hard for an intruder to break and enter by keeping shrubs and trees away from buildings, using strong locks and doors and installing window bars and gates.

Kempo also shared robbery tips, including being observant and watching for suspicious activity or people wearing inappropriate clothing, and having employees use a buddy system when opening and closing the business.

If a robbery does happen, Kempo said, “Try to remain calm; try to commit to memory a description of the robber and any vehicle; plan pre-arranged signals between employees.”

In other business, the chamber noted:

• nominations for the 2016 Business and Citizens of the Year awards are due Friday;

• entries for the Christmas Decoration Content, open to businesses between and along Main Street in both Kenbridge and Victoria are due Dec. 6;

• the Central High School Student of the Quarter has been chosen and will be honored at the chamber’s annual meeting and banquet Jan.20;

• President Mel Payne’s goal of increasing chamber membership from 38 to between 100-120 by year’s end is close with a current roster of 98; and

• the chamber’s next meeting will be Nov. 17 at noon in Victoria Restaurant and will include a door prize of $500.