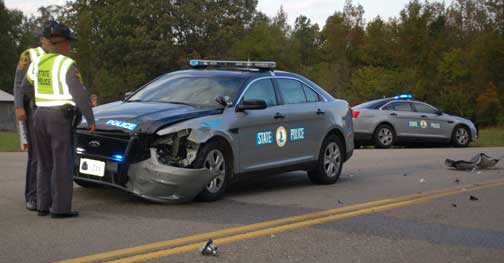 Virginia Sate Police (VSP) troopers look over a wreck of one of their own patrol cars. Around 5 p.m. Thursday, the patrol car was coming around a curve on Route 723 (Burkeville Road) when it collided with a pickup truck coming off Route 626 (Kings Road). Officials from various Lunenburg agencies said they did not assist at the site since the VSP investigates its own wrecks. VSP spokesperson Corinne Gellar said the trooper was driving southbound on Route 723 in a 2014 Ford Taurus when a 2011 Ford F150 pulled out from Route 626, causing the patrol car to strike the truck. There were no injuries and only minor damage to the vehicles. No charges are being filed, Gellar said. (Photo by Wanda Fix)