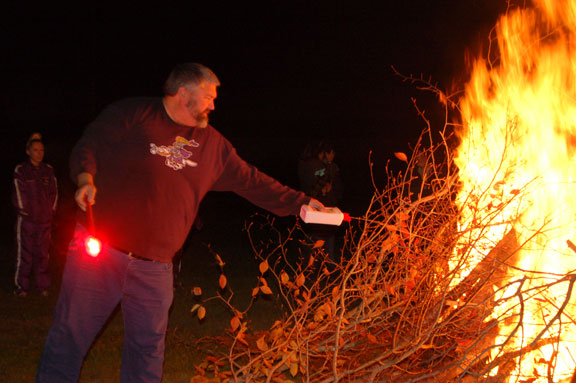 Traditions play an important role in stoking school spirit, and one from yesteryear has made a comeback at Central High School — a bonfire commemorating the varsity football team’s berth in the playoffs.

“It was a tradition many years ago at Central High School that we kind of brought back last year, and the first week of the playoffs, we’ve done a bonfire the last two years,” Central Principal John Long said. “We’re kind of going back to traditions, back when Central High School was in it’s heydey, when they were winning state championships very routinely. So, it was done for the football team.”

Long said the bonfire is a tradition that goes back to approximately 1968, and it might have originally been tied to homecoming, eventually becoming connected to the Chargers reaching the football postseason.

“I’m not sure how many years there was a gap where it wasn’t done,” he said.

A group of teachers came to him to revive the event.

“The Central office was very supportive,” Long said. “It was really the community of Central High School that wanted it back. I was just the person that made different calls to different people.”

The school lit the bonfire Nov. 16 toward the back of the parking lot at Central. It was prepared by the school’s agriculture department and anyone and everyone was invited.

“The school, the parents, the community — we don’t turn anybody away,” Long said. “We try to make it just a community event.”

Central’s season ends in second round