“They learned late in the process, and I think late in 2016, that there was going to be a cost associated with their project, which they had not anticipated,” said Russell Slayton, the authority’s attorney on Jan. 26 during its first meeting of the year.

According to Slayton, officials with Forest Pro spoke with Heartland Authority Chairman Gary Walker, who also serves on the Charlotte County Board of Supervisors, and learned the cost would be about $80,000.

“It was a cost they hadn’t anticipated and they asked if the authority would pay that cost,” Slayton said.

The $80,000 fee is not associated with only a Virginia Department of Environmental Quality  permit, according to Slayton, but a phosphorus remediation charge at the site.

While there are three ways remediation could be accomplished, Slayton said the option of purchasing DEQ approved credits would cost just over $83,000 in addition to $2,700 for a DEQ permit, totaling around $86,000.

“The $86,000 exceeds the amount that was discussed,” Slayton said, noting both parties were unaware of the additional fee at the time of the sale.

Slayton said it was not uncommon for a company to ask for an incentive.

“I’m not opposed to an incentive package,” said C.R. “Bob” Timmons, who represents Prince Edward County on the authority, “…but, I would like to have some sort of estimate from someone that would say that putting in the forebays (stone baffles) … in the existing pond, and then a 20- or 30-year maintenance cost for those forebays is going to be (a certain amount) versus $40,000 or $80,000.”

The forebays would be used to retain the phosphorus from entering the pond.

Timmons said even with purchasing the credits there will still be a phosphorus discharge in the pond. “I’m not really comfortable with that, personally,” Timmons said.

He suggested the authority table the request and gather estimates on correcting the pond to DEQ requirements.

Slayton said in order to seek out the alternatives, more work must completed, which would come with a bill.

“We’ve sold him the land, he owns it,” said Walker. “Mr. (Charles) Tapscott has been waiting for 16 months now … he’s beyond frustrated. He bought the land in November 2015 and he thought he was going to have it built by January or February of last year.”

Charlotte County representative R.B. Clark, who also serves as county administrator, said he felt strongly that Forest Pro would not want to wait on a decision.

“It almost got to the point where he (Tapscott is) not going to consider this anymore,” Clark said.

Representatives with Forest Pro couldn’t be reached for comment.

Slayton drafted an agreement outlining a number of conditions, which would reflect Forest Pro receiving the reimbursement after construction of the facility and a specific set of provisions had been met.

According to the approved agreement, “at the time of closing, both parties believed that the site had been approved by the Virginia (DEQ) for the improvements thereon proposed by (the) company (Forest Pro), and that no fee was due to DEQ.”

It was not until after the closing that the $80,000 was necessary in order for the approval and issuance of a permit from DEQ.

According to the agreement, in order to receive the $40,000 reimbursement from the authority, Forest Pro must secure a certificate of occupancy and submit a copy to the authority, pay an $80,000 fee to DEQ “for review and approval of Company’s application, and issuance of a permit to the company,” submitting all necessary items to DEQ to receive a permit in order to enable proposed site improvements outlined in the agreement.

All improvements must be completed no later than Dec. 31, according to the agreement.

According to their website, Forest Pro is a family-owned equipment dealership specializing in new and used logging equipment with locations in Scottsville and Ashland. 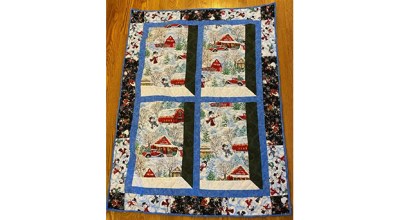 Church and Community Events for the week of Nov. 23

A Box of Love — Lift Jesus