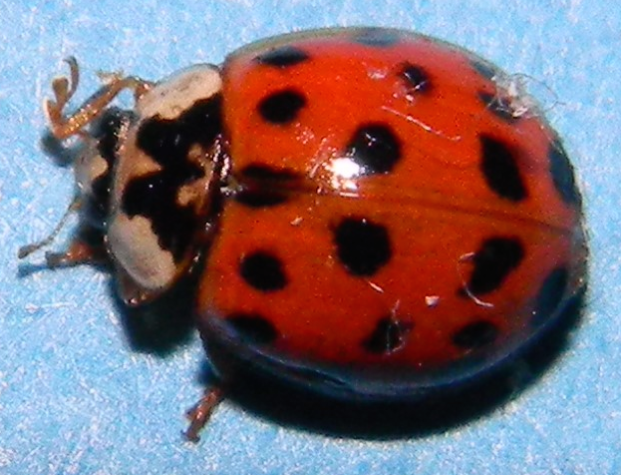 This photo of the Asian Lady Beetle shows the distinctive black M marking on white behind the head.

As I sit at my desk to write this column I can’t help but notice the small army of ladybugs moving about on the outside of the window. The day started out bathed in sunshine with an unusually warm breeze, the temperature hovering around 69 degrees Fahrenheit. Perfect weather for ladybugs to come out of hibernation I presume.

Within a matter of minutes a thick cloud cover rolled in and it is now raining…again. It marks the eighth day of rain for the month and it is just the 16th day of February. I was informed the entire state of Virginia was in a draught, so I am appreciative of the precipitation. At the same time I am concerned that the fair temperatures and volume of sudden moisture will trigger the vegetation and gardens to wake from their winters slumber too soon.

There are up to 5,000 different ladybug species in the world today. Ladybugs are in the Coccinellidae family and are also known as lady beetles or ladybird beetles. Their colors and patterns vary. The one most of us are familiar with has a solid black head with a red body and black spots and is known as the Seven-spotted ladybug.

Ladybugs are omnivores, their preferred diet being aphids, scale and other plant eating pests. Birds are the ladybugs main predator however frogs, wasps and spiders will dine on them also.

The ladybug’s lifespan is three to five years. They were brought to North America from Europe in the 1900s to control the growing aphid population in the farmer’s crops. A single ladybug colony consists of thousands and one ladybug can consume up to 5,000 insects during a lifetime. That’s one powerful pest eliminator.

They will swarm to the sides of warm structures illuminated by the sun. Although they may on occasion find their way into a home they are naturally inclined to overwinter out of doors under rocks and inside logs.

The docile Ladybug Coccinellidae is considered good luck in many cultures, lives outdoors and are harmless to humans.

The Ladybug is not to be confused with the Asian Lady Beetle harmonia axyridis introduced into the states in the 1900s from Asia also to control agricultural pests. Asian Lady Beetles look similar to the ladybug but are aggressive and bite.

Asian Lady Beetles will crawl into the cracks and crevices of a home and overwinter between the walls. When they emerge from hibernation in the spring their yellowish fluid can stain surfaces on which they crawl including walls and furniture. Some people can have allergic reactions to the Asian Lady Beetle, which can include and are not limited to conjunctivitis, hay fever, cough, asthma and hives. If they land on bare skin they can bite.

Asian Lady Beetles can be identified by a white marking behind the head in the openings of what resembles a black letter M.

If you find them in your home to avoid staining surfaces and the unpleasant smell do not squash or swat them. Vacuum them up or use sticky tape and discard.