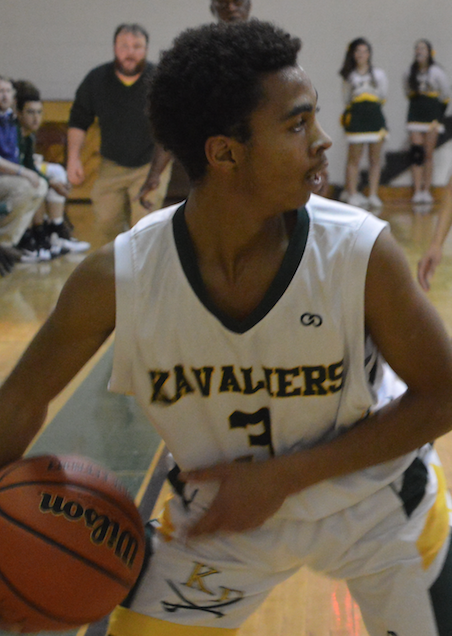 Kenston Forest School freshman point guard Moe’Wuante Morrison starred for the Kavaliers during the 2017-18 season and was named to the All-VCC first team.

A foundation for the future

Kenston Forest School’s varsity boys basketball team was not able to pair a winning finish with its winning start to the 2017-18 season, but the Kavaliers did show that positive things are on the horizon.

“There was only one senior on the team, and I think they showed glimpses of what they’re capable of,” Kavs Head Coach Scotty Atkins said. “They made a lot of mistakes that young teams make, and we’ll build on that to next year, and I think they’re going to win a bunch of ballgames next year.”

After starting the season 5-1, Kenston Forest ended up with a 6-16 overall record.

A key factor in the season was the absence of players from the lineup due to transfer, injury or illness. Tyler White and Javon Carter transferred out during the season.

“We never did get it back together,” Atkins said. “Even the last couple games, we had a couple players out with the flu.”

The season ended for the Kavaliers in the Virginia Colonial Conference tournament quarterfinals when they lost 81-28 to a Southampton Academy team that produced a truly remarkable offensive performance.

“We actually ran every defense that we’ve worked on the entire year at them, and they just couldn’t miss,” Atkins said. “It was one of those games.”

Helping illustrate this point, the Kavs lost only 56-51 to Southampton four days prior in their regular season finale. Atkins highlighted this contest as showcasing his team’s best performance of the season.

“We were actually short three starters that game, and we came in and gave them a great game,” he said.

Atkins noted his team showed an impressive balance in terms of individual contributions this season, particularly early on, but freshman point guard Moe’Wuante Morrison stood out, making the All-VCC first team. He led the team in points, assists and steals, averaging 16.4 points, three assists and two steals per game, “and (he) turned out to really be the leader of the team throughout the year,” the coach said.