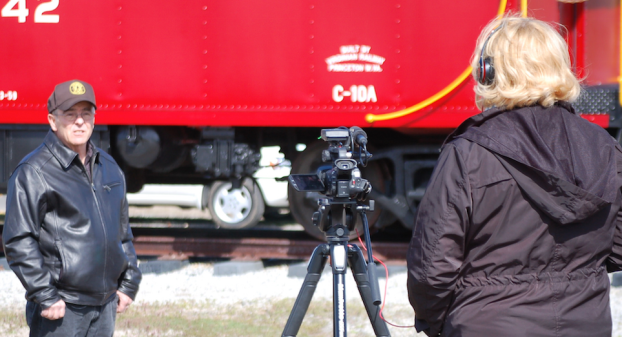 Victoria Town Councilmember Greg Elam is filmed speaking about the history of the Virginian Railway and its impact on Victoria for a PBS documentary with Executive Director of Blue Ridge PBS, Lisa Fenderson.

Filmmakers for a documentary set to air on PBS visited the Town of Victoria Monday. Those involved with the documentary, which will be about the Virginian Railway Heritage Trail, visited the Victoria Railroad Park and spoke with Victoria Town Councilmember and Railroad Expert Greg Elam.

“PBS is doing an hour-long documentary on the Virginian Railway Heritage Trail, and the Virginian was the railroad that came through Victoria and on over to Kenbridge,” Wiley said.

He said Monday was their first day shooting footage for the documentary, making Victoria one of their first stops. In the coming weeks, Wiley said they planned to travel to Norfolk and West Virginia, where the Virginian Railway also passed.

“The purpose of the trail is to identify surviving structures, facilities and equipment of the old Virginian Railroad, because it is such a popular railroad,” Wiley said. “People all across the country and around the world are interested in the Old Virginian for some reason, it’s just a very appealing thing.”

He said high winds may have affected the audio and said a return trip to Victoria could be possible. He estimates that the shooting for the film would be completed in June, and released on the area PBS station in September.

Wiley commented about Elam’s presentation and about the recently-installed kiosk at the park.

“Elam did very well and explained about the history of the railroad and Victoria and … all of the historical things,” Wiley said. “The new kiosk is very nice.”

Elam said the recording was a memorable experience.

“It went very well,” Elam said. “(Fenderson) spent some time down here and took a bunch of different pictures and we did a little video about the railroad, the history of it, the town and so on and so forth. Then we went and had lunch.”

Chris Hofler works full time at the Lunenburg Correctional Center. In his free hours, he spends time with his family,... read more