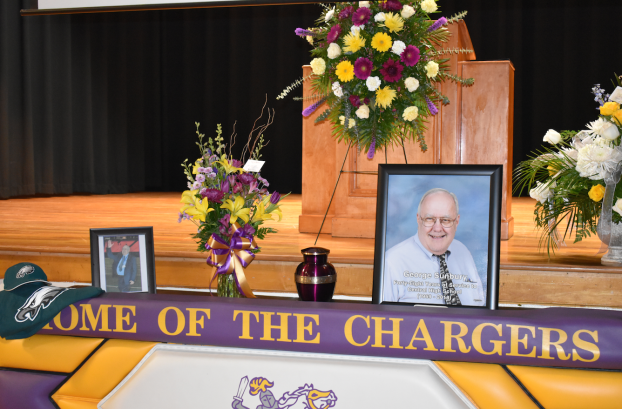 A table with a photo, flowers and and other items to remember George Sunbury’s life. Sunbury, a marketing and business education teacher for nearly 50 years at Central High School, was honored by faculty, student and family members, who remember his sense of humor and enthusiasm for his career.

Tell the stories of Sunbury’

Friends, colleagues and loved ones of George Willis Sunbury, 70, marketing and business education teacher, filled the gymnasium at Central High School Thursday to remember his extraordinary life and provide comfort following his passing.

“Mr. Sunbury was a man who gave us all strength, wisdom, and reminded us of the positive influence that educators possess,” Long said. “He was always there for his Central family. (Actor) Jack Lemmon said that ‘death ends a life, not a relationship.’ Our friendship with Mr. Sunbury is not over with his passing.”

“There is nothing larger than the heart of Mr. Sunbury,” Long said, quoting a portion of the Central High School motto.

“He was a trusted friend and mentor for 49 years with the students of Lunenburg County, mostly within the corridors here at Central High School,” Berkley said. “Sorrow fills our hearts this sad moment. A sorrow that is deep and personal. George Sunbury has silently closed the door of life and departed from us. Our lives will be empty in the areas that he brightened for us. His jokes, his stories will be missed, and the kind words he spoke are now gone, but the memories will live on.”

George grew up in Biglerville, Pennsylvania. He was an only child who was close to his parents, and had an extensive record collection, Bob said.

Bob said a leg injury prevented George from playing football himself. But he said George dedicated years to watching the Chargers team grow, and his loyalty toward the Philadelphia Eagles.

“One of my best memories of George was we would spend every Thanksgiving and Christmas together,” Bob said, though he noted in the 1980s and ’90s George stayed home because the Chargers were playing too well. “He always bragged about his DECA people doing so well when they (went to) districts and regionals and all, and he never said he mentored them, it was just they were on their own, they did it themselves. He never came across as a bragger.”

He thanked Barry Carnes and the division for their support.

Cecil Holloman, friend of Sunbury’s, spoke about he, Sunbury, Carnes and Donnie Hardy as the four amigos. He spoke about their humorous escapades, particularly about Sunbury’s journey to Lunenburg. He said Sunbury initially had an interview for a teaching position in Mecklenburg, North Carolina. A wrong turn took him to Boydin, where an administrator at the school told him they might have an opening for a teacher in Lunenburg. Sunbury accepted the position, and his future home.

“That wrong turn put George Sunbury in Lunenburg County the fall of 1969, and that lifelong Lunenburg educator has overseen the placement of several generations in marketing education and preparing them for a future in business,” Holloman said. “Aren’t we lucky for a wrong turn?”

He asked current and past students, faculty, and administrators to stand to remember Sunbury. He told them they were his family.

“Last Friday morning, the four amigos became three,” Holloman said, “and that void will never, ever be filled. We want to continue to share these George stories, and invite you to do the same. For as long as someone lives in our memories, that person never really goes away.”

“His life, his laughter, his music, his everything brings us comfort,” Collins said. “When we walk outside this building and come back in tomorrow, and George isn’t here to greet us … we can comfort one another. Still George, gives us laughter, gives us hope, gives us love. That’s why we’re here. Not to be comfortable, but so that we can comfort others.

The mother of a 5-year-old boy who died in 2017 from blunt force trauma has been indicted on three counts... read more