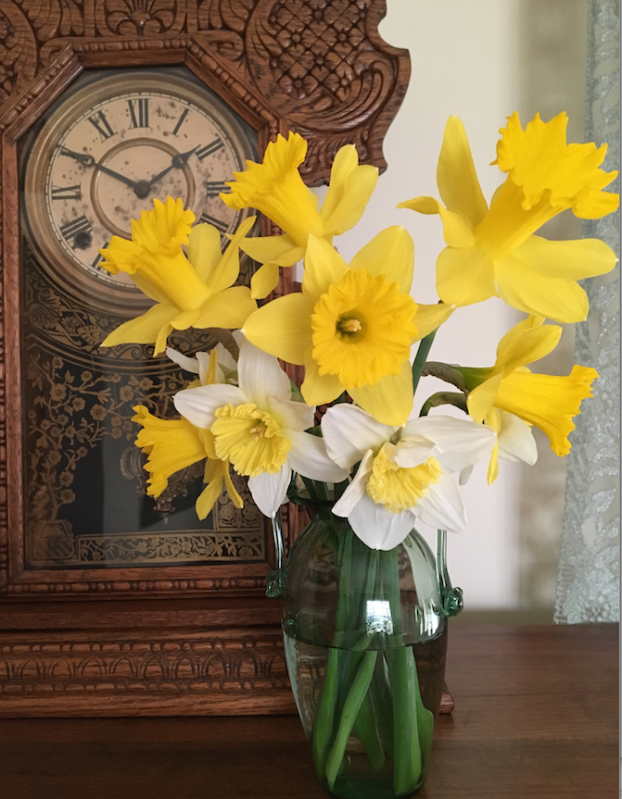 Daffodils make a low maintenance addition to your garden.

There are many different species of the daffodil with many new varieties produced each year. It is one of the first flowers to welcome the arrival of spring. My favorite and the most commonly known is the Jonquil (Narcissus jonquilla) also called the rush daffodil.

The Jonquil is native to Spain and Portugal and has become naturalized in many other regions of the globe. It has been cultivated in France since the 18th century and is used to make Narcissus Oil, a component in many modern perfumes.

Jonquils come in several different colors, the most prevalent being yellow and white. They grow wild in meadows and forests of their native lands, however the ones we know have been developed in the United States. They grow from bulbs and are best planted in the fall for spring blooms the next year. Once established they are easy, low-maintenance and long-living flowers to grow. Some tips to remember when planting jonquils are; they require partial-to-full sun and well-drained soil. They are very sensitive to overwatering, which will result in the bulbs rotting.

Known for its beauty and splendor with its bright colorful flowers and sweet fragrance the jonquil has many different symbolisms attached to it. It is the symbolic flower of March and of the 10th wedding anniversary. They are known as a symbol of hope and new beginnings. It is believed by some that a bunch offered as a gift ensures the receiver happiness and good fortune, while one single flower predicts misfortune.

Like everything in life, for every bright side there is a dark one also. The Jonquil is no exception to that rule. All narcissus varieties contain a toxic alkaloid chemical lycorine, which makes them poisonous. The cut stems of all daffodil varieties will secrete a toxic substance that will damage other flowers if put in a vase together in floral arrangements. If mixing them into an arrangement keep the daffodils separate for at least 24 hours before incorporating them and then change the water often.

This toxic chemical nature of these plants, some believe will also keep some garden pests like moles and voles away. I have tried this and it has proved to be true time after time.

For anyone who has an interest in Greek mythology, many people believe that the daffodil derived its name from the story of the Greek man named Narcissus, who after pushing away the love struck nymph Echo was subject to the prison of his own vanity, subsequently killing himself after his realization of wrongdoing.

Naval history buffs might be interested that the U.S. commissioned the war ship USS Jonquil in 1863. She served the Union Navy during the American Civil War. She joined the South Atlantic Blockading Squadron and was stationed off Charleston, South Carolina and in the sounds of Georgia.

I delight at the first sight of the blooming yellow and white jonquils in the garden every spring. Their cheery bright yellow and white arrival reassures me that spring is “right around the corner.”

This is week three in our Lenten devotional time. So far we have looked at what it means to be... read more