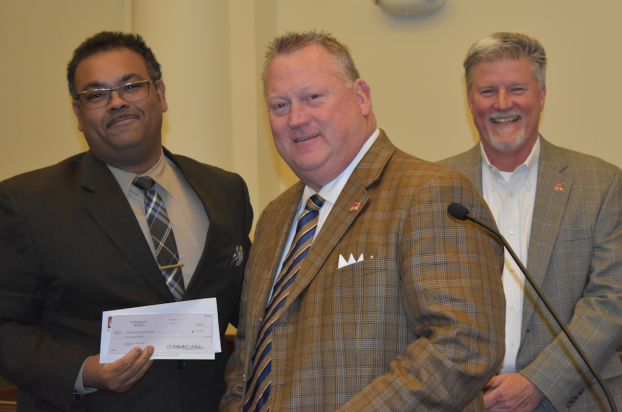 Representatives of Container First Services (CFS) presented donations to organizations in Lunenburg County during its annual report at the Lunenburg County Board of Supervisors meeting Thursday.

President and CEO Rob Guidry and CFS Chief Operating Officer Tim Webb discussed the host agreement between the company and county, as well as construction of a new cell at the Lunenburg County Landfill.

The projects were suggested by the county administration.

The first check, for $18,383, will cover the expenses to install equipment for a portable radio communication tower to be used by first responders.

Victoria Town Manager Rodney Newton explained that the county has been allowed to place emergency radio communication antennas on a cell tower erected in Dundas by Verizon, and it will allow emergency first responders with handheld radios to report to dispatchers.

Newton said the donated funds will allow the town to install radio communication equipment in the western end of the county.

“That will give us portable radio coverage over probably 90 percent of Lunenburg County,” Newton said, “which we have never had in 30-plus years.” Plymouth District Supervisor T. Wayne Hoover noted that multiple departments will benefit from the equipment. We can’t thank you all enough for helping us finish that today,” Hoover said.

The second check, for $10,000, was given to the Lunenburg County Public Library System (LCPLS) Inc. to cover costs related to the installation of disability accessible doors, restrooms and carpeting in the Ripberger Public Library in Kenbridge.

LCPLS President Luther Drummond said “We have surely appreciate the donation as well from CFS and the county thinking about us in this,” Drummond said.

Other discussions related to a new cell the CFS will be installing at the Lunenburg landfill.

Webb said in a phone interview Monday that construction on the cell would take place later this year.

He said no changes have taken place to the host agreement between CFS and the county.

Candidates file to run for office

Candidates for the Victoria and Kenbridge town councils have revealed their intent to run for office, according to town officials... read more