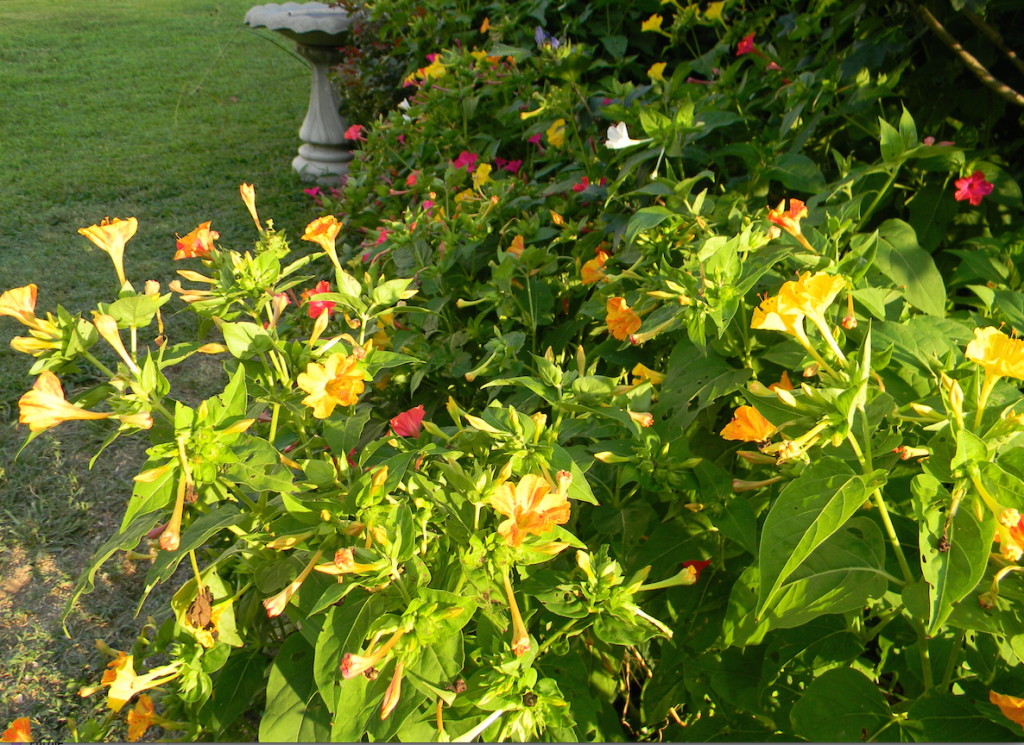 Have you taken in the multi colored beauty of summer’s four o’ clocks this year?

Four o’ clocks (Mirabilis jalapa) are also known as the “Marvel of Peru” a nod to its native South American habitat. They are a hardy perennial in zones 7b-11 and have been cultivated for hundreds of years. The Aztecs cultivated Mirabilis jalapa for medicinal and ornamental uses.

A very curious aspect of the plant is its proclivity for growing flowers of different colors on the same plant. It also demonstrates color changing phenomenon as the plant matures. An example is a yellow flower changing to dark pink and white flowers changing to violet. In addition an individual flower can be splashed with different colors, as if haphazardly painted with a brush.

One reported beneficial aspect of the four o’ clock is its potential for bioremediation of polluted soils with moderate loads of heavy metals such as cadmium.

The trumpet shaped flowers of the four o’clock open late in the afternoon on sunny days usually around the time of day it is named after. The flowers open in response to a drop in temperature. They release a strong sweet smelling fragrance throughout the night that attracts nocturnal moths such as the Sphinx and Hawk moths and other nighttime pollinators to their nectar. The flower of the four o’clock will only open once, after blooming the rise in temperature the next day will cause them to wilt and eventually fall off the plant.

This extraordinarily showy plant is fairly easy to grow. It prefers full sun and likes a neutral to slightly acidic soil. It can grow to a height of 1 to 3 feet high and is an aggressive self sower. There is no need to “dead head” or pull spent blooms, this plant will produce a perfusion of flowers on its own. It is heat and drought tolerant and is a favorite flower of the bees, butterflies and humming bird.

The four o’ clock’s flowers are used in some food coloring. The seeds of this plant are poisonous. I do not recommend planting them in areas small children or pets whom have a fondness of ingesting plant material will frequent.

Generations ago neighbors and friends would frequently share the seeds from their plants with each other. This once popular practice is how I ended up with these beauties in my garden. An elderly family friend gifted some to me in a small pot when I moved to Victoria. When fall arrived I planted them in one of my gardens, not expecting them to return and spread in the spring. Sadly the next summer my friend’s time here on earth expired, but to my delight I had a lush colorful stand of four o’ clocks thriving in my garden to remember him by.

It has been four years since my friend passed on and the four o’ clocks in my garden come back each spring to greet me. From what was once a small four inch potted plant now grows a garden full of the most colorful, sweet smelling flowers.

I look forward each spring to the return of the four o’ clocks, for their flowers bring back the memory of my friend all summer long.

Dawn Conrad is a columnist for The Kenbridge- Victoria Dispatch. She can be reached at conrad.gardenmuse@ gmail.com or fb.me/Conrad. gardenmuse.