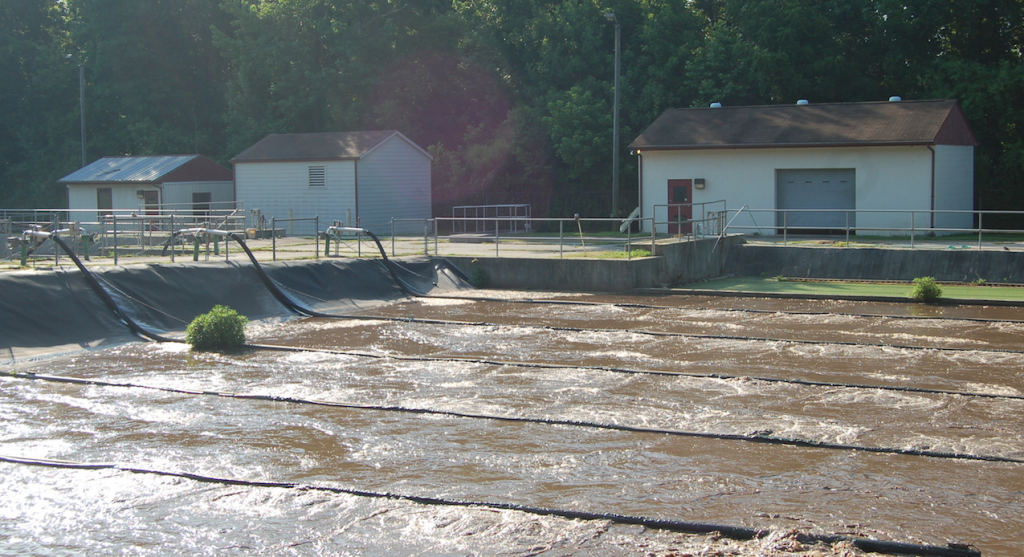 The east wastewater treatment facility at Fifth Street in Victoria, shown in this June photo, is set to have a study done by the Virginia Department of Environmental Quality to find potential causes and treatments of copper levels in the sewer facility that exceed the regulated amounts.

The Town of Victoria is having a consultant perform a Biotic Ligand Model (BLM) study to determine the cause of its high copper levels at the East Sewage Treatment Plant on Fifth Street. Virginia Department of Environmental Quality (VDEQ) recently released a consent order, detailing the violations and the actions the town needs to take to correct them, including performing the BLM study.

According to the VDEQ, Victoria has a Virginia Pollutant Discharge Elimination System (VPDES) permit to operate the treatment plant.

“The Permit allows the Town to discharge treated sewage from the Plant to an unnamed tributary (UT) of Big Hounds Creek, in strict compliance with the terms and conditions of the Permit,” the consent order cited.

Town Manager Rodney Newton confirmed the town is working to perform the corrective actions for the treatment plant.

“The town is working with a consulting firm in regards to the copper levels,” Newton said. He said the consulting firm is Shealy Consulting, LLC. “This is a process that will take approximately one year to complete.”

Newton said in an earlier interview the copper levels in the wastewater treatment facility is separate from the town’s drinking water, which has not been affected.

“This has nothing to do with the drinking water,” Newton said. “This is completely dealing with the sewer system, the treatment of the sewage and then what’s called the effluent base of the water that is discharged from the treatment facility after it is treated.”

The town received a fine from the DEQ this year for $9,000 for the treatment facility exceeding the regulated copper level limits.

According to the consent order released by VDEQ, the copper limit was reassessed when the permit the VDEQ gave the town was reissued in 2013.

The town and VDEQ held semi-annual reporting periods, where the town was expected to comply with the 5.7 ug/1 limit for copper.

VDEQ Blue Ridge Regional Office (BRRO) issued warning letters to the Town for the April 2016 and May 2016 copper exceedances.

“The Town responded to the Warning Letters and said it was increasing the amount of magnesium- hydroxide to the influent to meet the copper effluent limits,” the order cited. “However, the Town has been unable to get the effluent within the copper limits.”

The Town entered into an agreement with a consultant in Oct. 2016 to conduct a copper Water Effects Ratio (WER) study,” the order cited. “In Nov. 2016, according to the order, VDEQ informed the Town that a WER could no longer be conducted for copper. VDEQ suggested the Town conduct a study using the Biotic Ligand Model (BLM). The Town’s consultant asked DEQ for further guidance so the consultant could put together a study plan.”

While the town has fallen into compliance for its E. coli levels and its Ammonia as N levels, the town continues to not be in compliance with its copper levels.

“On August 22, 2017 Department staff met with representatives of the Town to discuss the copper violations,” the order cited. “During the meeting, the Town told DEQ it was still interested in conducting a BLM or WER study for copper … Following the August 2017 meeting, the Town continued to wait for DEQ to clarify whether a WER or BLM study would be accepted by both DEQ and EPA.”

“On April 25, 2018, the Town’s consultant submitted draft proposals for WER and BLM Studies,” the order cited. “On May 3, 2018, DEQ staff discussed the study proposals and Notice of Violations (NOVs) with the Town’s consultant and representatives of the Town. Following the meeting, the Town stated it would like to pursue a BLM study to amend the copper limits in the Permit.”

“The Town’s operating logs indicate that it discharged treated wastewater from the Plant every day from April 1, 2016 to April 30, 2018,” the order cited.