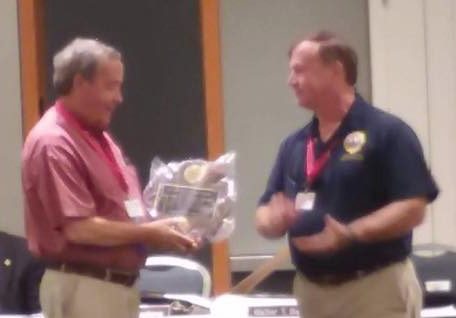 Richard “Dickie” Harris, chief of the Kenbridge Fire Department, was one of only five firefighters in the Virginia State Firefighters Association to earn the lifetime achievement award for his more than 50 years of service to Virginia firefighting organizations. Pictured are, from left, Harris and Virginia Fire Services Board Chair Walter Bailey.

Richard “Dickie” Harris, chief of the Kenbridge Fire Department, received a lifetime achievement award from the Virginia State Firefighters Association Aug. 3 at the Virginia State Firefighters Association conference held in Hampton. Harris was only one of five officials to have received this award from the association, which was founded in 1886, according to the website.

Harris was a past president of the association, and continues to serve on the executive board. His award recognized his services to Virginia firefighting organizations and area fire departments, which has spanned 53 years. He has also been active in the Virginia General Assembly to ensure volunteer fire departments are treated fairly in the event that new rules and regulations are presented. He said he has also worked on the state and local level to make sure departments have necessary equipment and material through consistent funding.

“I started when I was 18 and have been doing it ever since,” Harris said. He said all of his work is on a volunteer basis, which means he does not get paid for it. “It’s a very, very distinguished honor,” Virginia Fire Services Board Chair Walter Bailey said about the award.

“It’s only five people (that have) ever received that lifetime achievement award.”

The award was first started by the Virginia Fire Services Board many years ago, Bailey said. Harris also served two terms as president of the Virginia State Firefighters Association.

“Dickie was instrumental in establishing the fire services board through his leadership with Virginia Fire Services Council back in the 70s,” Bailey said. Harris said the award came as a surprise to him, but said it was gratifying to receive recognition from the organization.

“I didn’t do it for the award,” Harris said about his service with state fire departments. “But I have worked hard and I’m glad they recognized it.”

Harris said he has received congratulatory messages from firefighters at the Kenbridge Fire Department, his family members and from colleagues across Virginia.

Bailey said it was an honor to present Harris with the award.