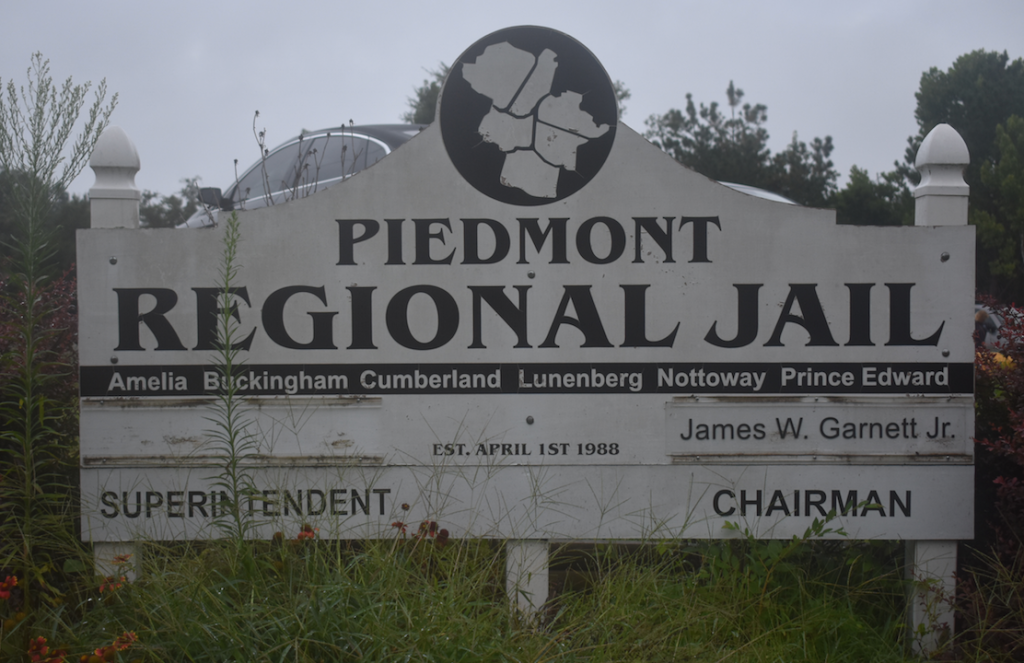 Pictured is the sign of the Piedmont Regional Jail. A motion to intervene in reference to the jail was filed in a federal court July 16.

A motion to intervene for the mother of an inmate who died at Piedmont Regional Jail (PRJ) following an assault that occurred at the jail was filed July 16 in a federal court.

Mark Dix, attorney for Commonwealth Law Group, PLLC, is representing Sisson, the plaintiff and administratrix of the estate, with Burnett & Williams based in Leesburg.

He said the motion to intervene, if granted by the U. S. District Court for the Eastern District of Virginia, would give Victoria Lynn Sisson, the mother of deceased PRJ inmate Jason Patrick Sisson, the standing to file papers, make motions and request the court to analyze the jail’s operations.

The eastern district of Virginia covers the jurisdictions of Farmville and Prince Edward County.

Dix said the mechanism used to seek intervention is known as permissive intervention. If the court determines the plaintiff shares a common question about the jail’s operations with the United States of America, represented by the U.S. Department of Justice, that initially filed an investigation into the jail’s evaluation and management of inmates’ medical and mental health in 2012, the plaintiff can ask the court for permission to intervene and to become a party in the lawsuit.

“We’re concerned about the extent to which the U.S. Department of Justice under the current administration may seek to press enforcement and monitoring of the jail in light of these two recent deaths, which in our opinion, were very preventable,” Dix said. Sisson will also file her own lawsuit against the jail for her son’s death in the near future, Dix said.

Jason was savagely battered by PRJ inmate George M. Chute on Aug. 12, 2017, the motion file cited. Jason was first taken to Centra Southside Community Hospital where he was found to have a basilar skull fracture with intracranial injury, the motion cited. He was promptly transferred to the Medical College of Virginia (“MCV”) for more acute trauma care.

Multiple diagnostic tests from the hospital found that Jason had fractures bilaterally of the temporal bone, which involvement included both inner and outer ear structures bilaterally resulting in permanent hearing impairment and fractures noted bilaterally on the occipital bone at the posterior margin of the condyles. In addition to the bone fractures, there were significant impairments with vascular structures around the sites of the fractures, the motion cited. It was noted upon admission that there were thromboses (blood clots) in the intracranial venous system, a fusiform aneurysm dilation in the intracranial segment of the left vertebral artery with the possibility of this being a dissecting aneurysm. Jason was discharged Aug. 18, 2017, the motion cited, with a diagnosis for sinus venous thrombosis and was prescribed, among other things, Enoxaprin (blood thinner) 80 milligrams (mg) every 12 hours to be given until International Normalized Ratio (INR) was therapeutic (at a range of 2-3), and warfarin (blood thinner) 5 mg daily.

INR, according to the motion, is a way of reporting the prothrombin time, a measure of the blood’s ability to coagulate or clot.

“According to his PRJ medical records, (Sisson) only received two doses of Enoxaprin (at approximately 0700 and 2100 hours on Aug. 20, 2017) and zero doses of warfarin. His International Normalized Ratio (INR) was never checked,” the motion cited.

“On the morning of Aug. 21, 2017, a correctional officer found Sisson lying on his cell floor incoherent, with altered mental status, facial drooping and decorticate rigidity; and with blood/ sputum coming from his mouth,” the motion cited. “Sisson was first taken to (Centra) Southside where, according to labs drawn at 7:54 a.m., he was noted to have an INR of 1.27 — well below the therapeutic range for someone on anti-coagulant therapy. Sisson was noted to have massive intracranial hemorrhaging.”

“He was promptly transferred via Med- Flight to MCV where, at 11:07 a.m., he was noted to have an INR of 1.1, consistent with someone not on anti-coagulant therapy. Sisson suffered a cardiac arrest at MCV but his pulse returned after chest compressions. By 6:10 p.m., Aug. 21, 2017, it was determined that Sisson was braindead. Sisson remained on life support while a decision was made whether to harvest his organs or preserve his body for a medical examiner investigation. Sisson was ultimately terminally extubated and died of cardiac arrest at 5:48 p.m. Aug. 22, 2017.”

The cause of death, according to MCV, was “transforaminal herniation due to epidural hematoma causing brain death and subsequent cardiopulmonary death.”

The motion also discussed the death of inmate Thomas Cubbage May 29, 2016, at Centra Southside Community Hospital from complications from cardiopulmonary arrest. The motion cited that Cubbage had a history of cardiovascular conditions.

The motion cited that his death took place a full five days after it was reported to PRJ correctional officials that Cubbage was coughing up blood and could not breathe while lying down; three days after a chest X-ray revealed an abnormality in Cubbage’s right upper lobe and he received no further medical follow-up; and one day after several inmates had pleaded with guards for hours to summon medical assistance for Cubbage because he was in such obvious distress. “Cubbage’s death was the result of inexcusable deliberate indifference, and was entirely preventable,” the motion cited.

James Welch, RN, a court monitor mutually selected by the parties to report on the jail’s Settlement Agreement, failed to make any note of Cubbage’s death or the circumstances leading up to and surrounding it, the motion cited. It is unknown whether PRJA reported the death to the United States (Department of Justice), or Welch.

Dix said the cases call into question PRJ’s commitment to medical and mental health and calls into question whether there has been real change implemented in its treatment of inmates’ health or whether the changes are “window dressings.”

He said the consent decree, or the order for the monitoring of the events at the jail due to the settlement agreement between the jail and the Department of Justice, is set to expire at the end of October.

He said another reason for the motion is that it is not entirely clear whether the jail has reported either or both deaths to the United States, a requirement under the order which is in place for the monitoring of that jail.

He said the jail is supposed to notify the United States (Department of Justice) and Welch, the court monitor, who he described as a kind of referee who monitors the jail’s activities.

The jail is supposed to notify both of them within 24 hours of any inmate death.

“There’s the underlying issue which is whether or not the changes that have been made at the jail are mere window dressings or whether they have indeed improved the quality of the health care at the jail because these two deaths call that into serious question.”

“We have some serious concerns about the manner in which these two inmates died. Particularly with respect to Ms. Sisson’s son,” Dix said. “When he was discharged from VCU, he was supposed to be put on a regiment of a couple blood thinners, and it appears at least one of those blood thinners was never administered. That’s just inexcusable.”

Piedmont Regional Jail Superintendent Jim Davis said the authority is aware of the motion. He said a response is forthcoming from Cohen.

Davis said the motion, if approved, would set back the settlement agreement and its October deadline.

He said the jail would have been found to have completed all of its 59 qualifications, and PRJ would be released from being monitored in October.

“If this motion goes through, it stops that, and we’ll have to stay on this settlement agreement,” Davis said.

“I have informed the lawyer that we are not in agreement with the motion to intervene,” Davis said. “He’s submitting something to stop it, that we don’t want it.”

Robinson, Farmer, Cox Associates generated a memorandum of the jail authority’s fiscal year audit, detailing a lack of official documentation for expenditures of public funds and seemingly hundreds and perhaps multiple thousands of dollars in excessive spending, a past Herald report cited.

In response to the deaths of Sisson and Cubbage listed in the motion, he declined to comment, saying, “Right now, I am not responding until we see the lawsuit. I have not received a lawsuit except the motion to intervene, and that’s all that I am dealing with at this time.”