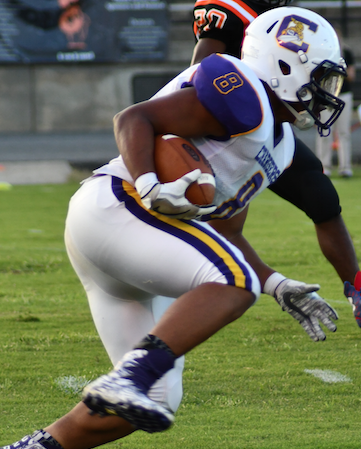 Central High School’s varsity football team was in position to open its 2018 campaign with a win Friday night, but host Altavista High School scored 14 unanswered points in the fourth quarter to escape with a 21-17 victory.

“We had them 17-7 in the fourth quarter and just couldn’t hang on,” Chargers Head Coach Will Thomas said. “It’s just extremely disappointing for us and the kids. I don’t know. The kids played hard, they were in the game and had some tough plays. We played really well, I thought, at times. Too many mistakes on offense. Jumping offsides really hurt us at the end.”

In the second half, Central was actually looking to expand on its 10-point lead.

“We had it on the goal line and got a penalty,” Thomas said, noting careless Charger mistakes. “We were on the goal line getting ready to make it 24-7, and we felt like 24-7 — that game is out of reach, but we just couldn’t close the deal.”

Instead, he noted that the Chargers fumbled the ball, and the Colonels ran it all the way back for a touchdown to make the score 17-14.

Then Central struggled to respond.

“We just couldn’t get anything going, offensively — kept shooting ourselves in the foot,” Thomas said, adding that his team had a field goal blocked.

He said Altavista got its go-ahead score after a receiver took a short pass and broke a tackle.

Thomas noted his team has continued to improve each week.

He praised Khalil Wood and T’Zion Wilkerson for having good games running the ball. Wood led the Chargers with 23 carries for 124 yards and a touchdown. Wilkerson had 19 carries for 113 yards.

“Daquan Lee had a good game as a fullback,” Thomas said.

Lee finished with seven carries for 46 yards and a touchdown.