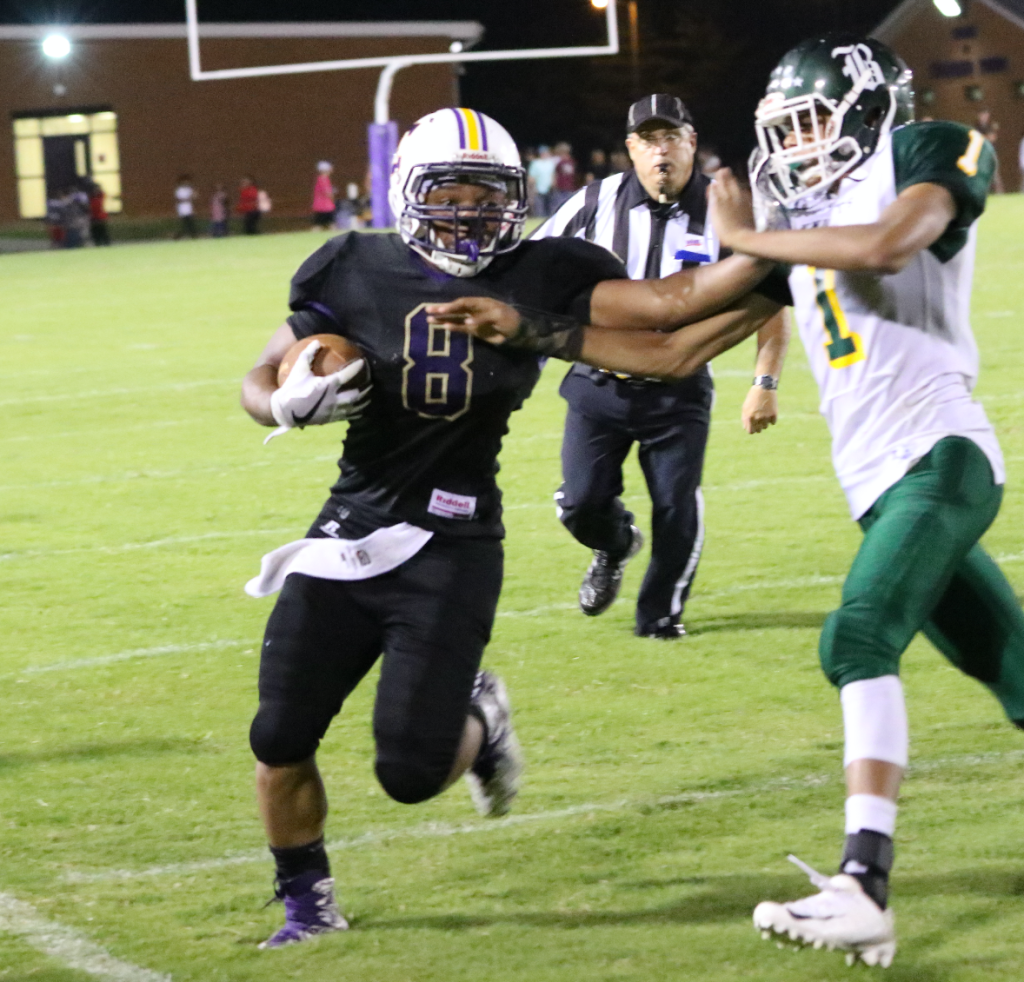 Central High School junior running back T'Zion Wilkerson, left, holds off a Buckingham County High School defender Wednesday night. In front of their home crowd, the Chargers prevailed 14-7 in overtime for their first victory of the season. (Photo by Titus Mohler)

Central High School’s varsity football team remained steadfast Wednesday night in a battle against visiting Buckingham County High School that extended beyond regulation, and in the end, the Chargers claimed their first victory of the season, 14-7, in overtime.

Will Thomas, Central’s head coach, was thrilled with his team’s performance.

“Our kids just played out of their freakin’ heads, man,” he said. “That’s what it comes down to. They didn’t quit, they never gave up in overtime, and they were still rocking and rolling. They were ready to go.”

The contest was scoreless until three minutes, 32 seconds remained in the fourth quarter when the Chargers reached the end zone first. On a drive that started around the Buckingham 3o-yard line after senior safety/kicker Earl Ginn intercepted a Knights pass, junior running back Darien Jones ran for an approximately 13-yard touchdown to help put the Chargers up 7-0.

The Knights responded immediately with a kickoff return that initially appeared to be for a touchdown. An illegal blocking penalty brought it back part of the way, but Buckingham still had the ball at Central’s 36-yard line. The Knights scored on an approximately 20-yard run and hit the extra point kick to tie the game 7-7 with 2:07 left.

The Chargers fumbled the ball and turned it over on their next possession with about 25 seconds remaining, but their defense ensured Buckingham would not capitalize on it.

Central received possession of the ball first in overtime. Rules of overtime dictate that each team receives an offensive possession starting at its opponent’s 10-yard line with a set of downs to try to score.

Strong running helped the Chargers halve the distance to the goal line, and then junior Khalil Wood capped the effort with a strong 5-yard touchdown run. Ginn hit the extra point kick, and Central was up 14-7.

Buckingham got off to a fast start on its possession, reaching the Chargers’ 4-yard line on the first play. But on their second play, the Knights fumbled the ball and Central recovered, ending the game.

Thomas contrasted the performance of his team to that of the 2017 Chargers.

“Last year, it was rough, because we’d lose games like that,” he said. “We just found a way to lose close games. We lost to Buckingham last year; we were up a couple touchdowns.”

But Wednesday featured a different story.

“I thought we outplayed them,” Thomas said.

The game took place Wednesday due to inclement weather expected to be coming to the region on the weekend as a result of Hurricane Florence.

For more coverage of Wednesday’s game, see next week’s edition of The Dispatch and this website following publication.