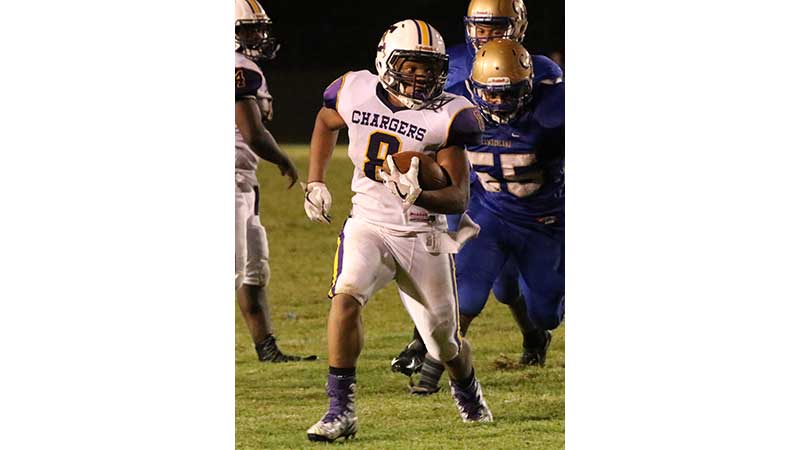 Junior running back T'Zion Wilkerson, pictured from a previous game, and the rest of the Central High School varsity football team have helped turned around the Chargers' season in the last three weeks. (Photo by Titus Mohler)

The young Central High School varsity football team has suddenly improved to .500 for the season with its third win in a row, defeating host Bluestone High School 29-14 on Friday night.

“It was a tough game,” Chargers Head Coach Will Thomas said. “It was 14-14 at half. The kids played hard. They just kept digging away. (The Barons) went up on us first, and we answered.”

Central was able to overcome some mistakes, including a fumble about one yard out from the goal line at one point.

Thomas pointed to several Charger standouts, including wing back/defensive back Trey Patterson III, who caught an interception and had five solo tackles on defense and on offense, made a crucial 20-yard run on fourth down in the second quarter that set up a game-tying touchdown.

Geontra Ragsdale continued to be a consistent force on defense for the Chargers, recording six tackles, including two solo and three for a loss.

Other offensive performers of note included Khalil Wood, who had 15 carries for 64 yards and a touchdown, and Anthony, who also ran for a touchdown.

The Chargers had started the year with a trio of losses in which they were outscored 122-38, but they broke into the win column Wednesday, Sept. 12, with a 14-7 overtime home win against Buckingham County High School and then hit the road to defeat winless Cumberland County High School 48-6 on Sept. 21.

“It’s like a switch got turned on by those guys, so hopefully we’ll keep on going,” Thomas said.

Thomas praised the strength of the Statesmen offensive and defensive lines and noted that Randolph-Henry has played teams close this season.