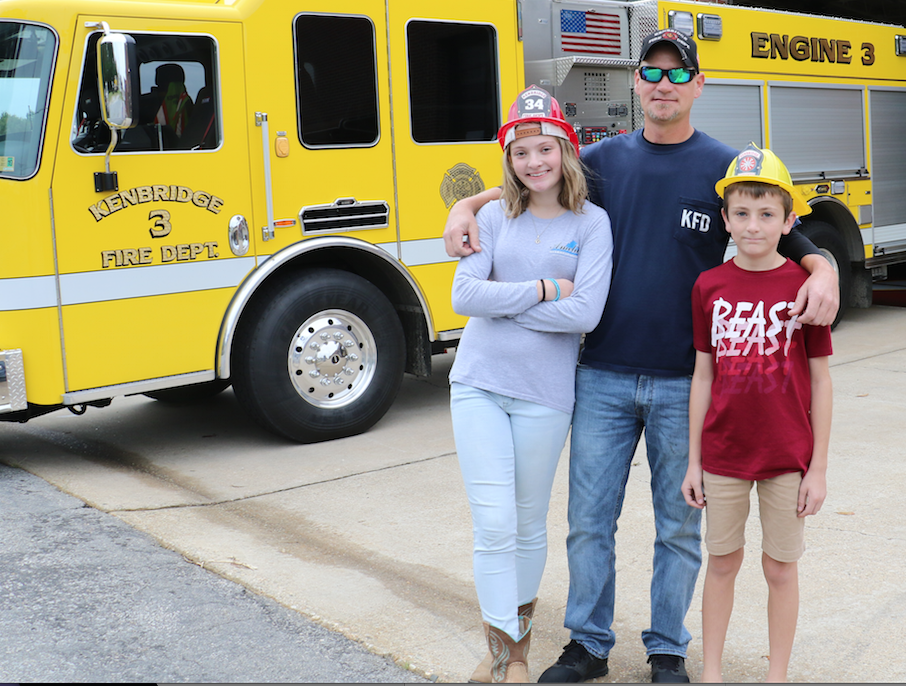 From left, Mikayla Ray, Firefighter Mac Duffer and Ira Long pose for a photo in front of the Kenbridge Fire Department (KFD) on Sunday afternoon, offering a glimpse of the access to the department that families and children had during the annual KFD Open House.

The tradition of the Kenbridge Fire Department (KFD) Open House was strong in its 20th year, as nearly 300 people attended according to KFD Fire Chief Richard W. Harris.

“It was a nice turnout,” he said. “We were pleased with it.”

He noted that families made up most of the crowd, with children, in particular, enjoying the activities offered.

Young Ira Long said what he enjoyed most about the event was the ride on a firetruck.

“We’d take them down Sixth Avenue, circle back around to Fifth and bring them around, just give them a ride on the truck,” Firefighter Mac Duffer said. “We just kind of give them a little tour with it, see how it is riding in it. We had one set up to where they could shoot the water out of it, kind of feel how to shoot the water. It had the little display where they could shoot the little flames in the windows.”

Harris said, “(We) let the kids play with the fire hose in actually putting out a simulated fire. It wasn’t an actual fire.”

The open house, which ran from noon-3 p.m., offered lunch to those in attendance. Food included hot dogs, hamburgers, chips and cookies.

Harris reflected on what is and has been the consistent benefit of the KFD Open House that was realized again Sunday.

“First of all, I think the citizens enjoy seeing our equipment and meeting the firefighters that they don’t know,” he said. “Beyond that, I think it helps with recruitment of junior firefighters as they grow a little bit older. They enjoyed riding the firetruck and so forth and enjoyed what they saw, so we think it helps with our membership. Realizing that a lot of the kids are young, but as they grow a little bit older, I think it attracts them back to the fire department, which is extremely beneficial for us.”