Virginia State Police provided an update to an accident that involved a school bus and dump trunk in the area of Route 40 and Fletcher Chapel Road in Lunenburg County this afternoon.

“A Kenston Forest School bus and truck were traveling south on Route 40,” Corinne Geller with Virginia State Police said. “As it slowed to make a left turn onto Fletcher Chapel Road, the truck failed to stop in time and struck the rear of the bus. The impact of the crash caused the bus to spin around and overturn onto its side.”

“There were a total of 13 elementary school-aged student passengers on the bus,” Geller said. “Five students were transported by ambulance to VCU Health Community Hospital in South Hill for treatment of minor injuries. The bus driver was driven by a passenger vehicle to the hospital as a precautionary measure.”

Geller said the driver of the truck, John R. Grizzard, 38, of Emporia, was charged with failure to maintain control of his vehicle. Grizzard was not injured in the crash. His truck was transporting a dumpster, which remained intact in the crash.

“The crash remains under investigation,” Geller said. “The Virginia State Police Motor Carrier Safety Team also responded to the scene to assist with the investigation.” 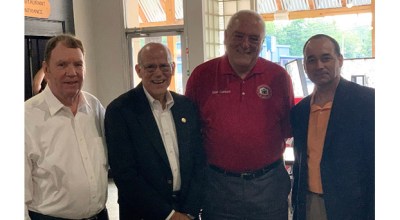