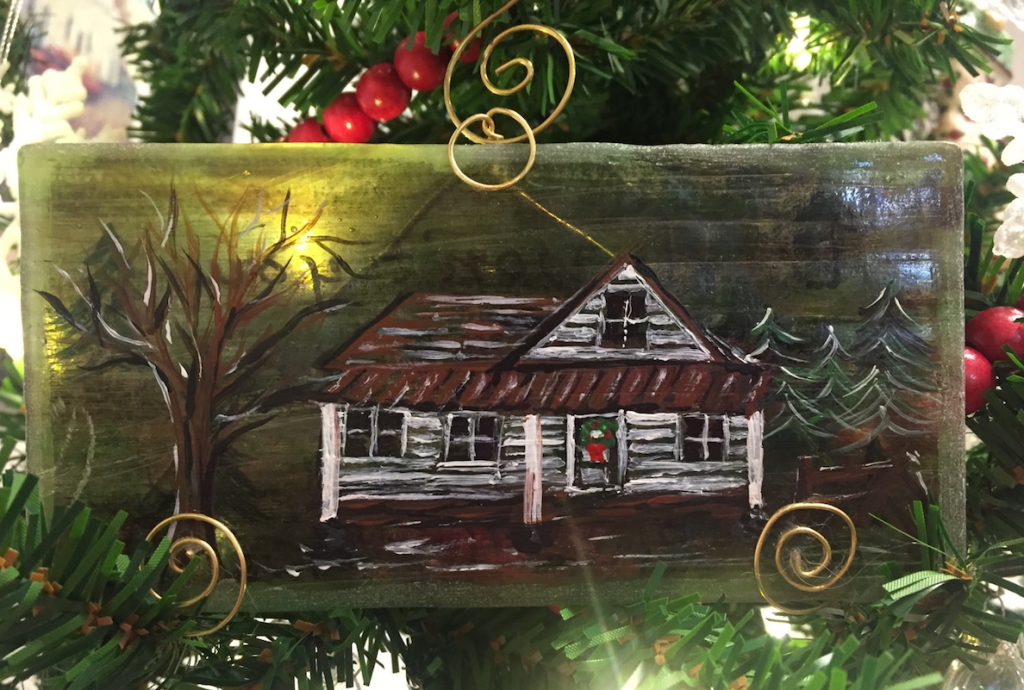 This ornament depicting a “vernacular farmhouse” with a simple holiday wreath on the door was painted on glass by Kathleen Baldwin of Victoria. It will represent Lunenburg County on Virginia’s Executive Mansion Tree in Richmond during the holiday season.

The Lunenburg County Historical Society recently announced that an ornament created by artist Kathleen Baldwin of Victoria is the winner of the annual contest sponsored by the Virginia Association of Counties that encourages all of the counties in the Commonwealth to submit one handcrafted ornament that uniquely represents that locality. Winning ornaments from each of the state’s jurisdictions – including towns and cities – will hang on the Executive Mansion Tree for visitors to view during the Christmas holidays.

In late September, the historical society sounded the appeal for entries which were required to be submitted within certain guidelines according to size and materials used. All had to be hand-crafted. The ornament that was chosen to represent Lunenburg was painted by hand on glass by Baldwin.

According to the release Baldwin had this to say about her choice of an entry, “The scene depicts a ‘vernacular farmhouse,’ typical of many of the old farmhouses in Lunenburg County. This particular house is based on a sketch I did of a farmhouse located on Rehoboth Road. The glass upon which the scene is painted is a remnant from a stained glass window from the old St. Andrew’s Church in Victoria, which burned in 2014 and was later deconsecrated and demolished.”

The artist went on to explain, “The feeling that I have attempted to convey is the question of what family may have once lived in this farmhouse. Although it is simple and rustic, it retains its quiet dignity to this day.”

The back of the ornament is decorated with the sentimental words, “Daddy, won’t you take me back to Lunenburg County?” This question is surrounded by evergreen trees painted with branches that are clad in snow. The words chosen by the artist paraphrase John Prine’s song, “Paradise.”

The release further cited, “The historical society thanks the Lunenburg County Administration office for its assistance in making this contest possible and congratulates Kathleen Baldwin on her outstanding ornament reminiscent of days past in Lunenburg.” See https:// executivemansion.virginia.gov for information about available holiday tours when you can see ornaments from all over Virginia on the Executive Mansion tree.