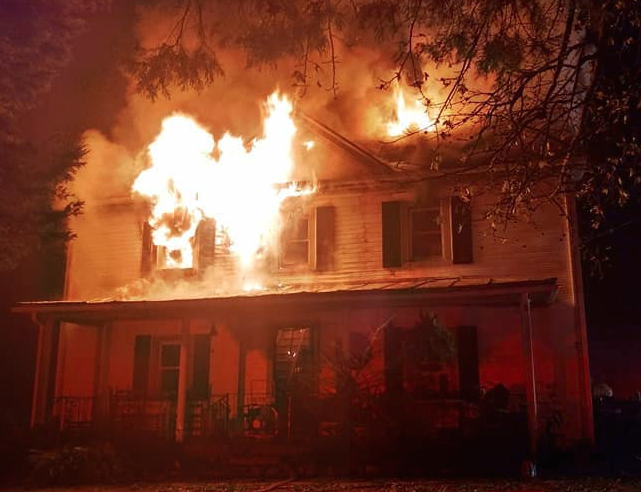 Pictured is a fire that occurred at the residence of Nina Davis and Jake Rifkin at 7517 Plank Road in Kenbridge in October. A concern surfaced about a tank that had reportedly been empty at the site of the fire.

In response to an anonymous letter The Dispatch received about a report of an empty water tanker at the site of a fire that occurred in October, we contacted a few representatives involved during the incident.

The fire occurred at 7517 Plank Road in Kenbridge, resulting in a total loss of the home of Nina Davis and Jake Rifkin.

Kenbridge Fire Chief Richard “Dickie” Harris, Davis and Rifkin spoke in reference to the incident. Harris, Rifkin and Davis said the aforementioned water tank had been leaking. The Kenbridge Fire Department had mechanics based in North Carolina examine the tanker, which holds approximately 2,800 gallons of water, and order the part needed to repair the leak. Harris said the part cost approximately $7,000.

While the department waited for the part to arrive, the tank was kept empty to prevent it from leaking inside the fire station. When it was dispatched, firefighters were instructed to take the tanker outside, fill it with water and then respond to the incident at hand.

The driver who took the tank to the site of the fire had reportedly not been aware of the instructions and had missed a few meetings in which the volunteers received instructions about the tanker.

“That’s why it showed up here empty,” Davis said about the tanker.

Harris, and Rifkin said that there were other trucks on-site that had water, and Victoria Fire & Rescue provided a water tanker at the request of Kenbridge Fire Department. Rifkin said there was a mini tank at the site that held approximately 1,250 gallons of water.

Rifkin said he reported a 17-minute response from when the first phone call was made to when the first fire trucks started to arrive, a response that he said given the circumstances were remarkable.

“You don’t see that,” Rifkin said.

Concerning the response from the firefighters, Harris said firefighters were also working to help a friend and co-worker.

“They all tried everything they could to save as much of that house as they could, and they did not only because they wanted to save the property but second of all, they want to try and save one of their own firefighters,” Harris said.

Davis said she did not cast blame on any of the first responders or the departments involved, noting all are volunteers and were doing the best they could.

She said the driveway to her and Rifkin’s property stretches approximately a quarter mile, and that “there were firetrucks all the way to the main road.”

Davis said the property has a wood stove, but they had cleaned it 10 days prior to the fire. They had also extended the chimney and put in a brand-new pipe a couple of years ago. She and Harris said a thimble board, a 2 by 4 board that surrounds the outside of chimney, got hot and caught fire.

“100-year-old wood that starts to go up, it goes up quick,” Davis said, “and it goes quicker than we thought it would. You know, so we’re just standing, kind of standing back, waiting for water, and watching it go up in flames, which wasn’t really cool. But I understand what happened and why it happened, and I wish the fire departments would work together a little bit better. There’s probably a few things that could be fixed.”

Concerning the tanker, Davis said it may have been “Not so much as a communication breakdown as they are just doing the best that they can.” She said both fire departments gave checks and donations to help her and Rifkin after the fire.

No one who spoke saw the situation as black or white.

“Do I think the outcome of our fire could have been different?” Rifkin said. “We don’t know. You don’t know that. When we’re dealing with … I’m a firefighter. Could things have been done different? Maybe. But the outcome would have still been the same. We all went home safe. Everybody went back to their families. Nobody got hurt.”