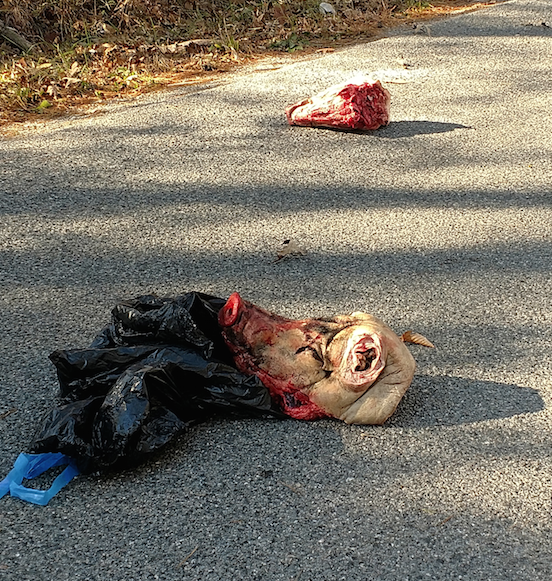 Pictured is a pig’s head on Old Mansion Road near the Lunenburg County landfill. This and other waste were reported near the landfill site.

Several issues related to the Lunenburg Landfill, including reports of trash or debris on roadways and changes to the host fees, were discussed by members of the Lunenburg County Board of Supervisors during its Thursday meeting.

County Attorney Frank Rennie brought up the increases to the host fees that Lunenburg County should charge to Container First Services (CFS), the company that owns the Lunenburg Landfill.

In a letter addressed to CFS leadership Rob Guidry and Tim Webb that Rennie read aloud during the meeting, Rennie said Lunenburg’s host agreement with CFS cited that host fees would increase if tipping fees increased. Tipping fees are determined by CFS in reference to the volume of waste a landfill receives.

Rennie said based on the formula accepted in the host agreement, the host fee should have been increased to $1.14 per ton for 2018.

Because there is a minimum host fee of $150,000 per year, the increase would not make any difference in the amount that will be paid to Lunenburg County for 2018. The Board of Supervisors delayed implementing any increase in the host fee for 2018.

Commencing Jan. 1, 2019, Rennie said, the host fee will increase to $1.14 per ton, and that will be up from $1 per ton. Rennie, in the letter, asked CFS leadership to inform county landfill liaison, Carl Ashworth, if there are any increases in the tipping fee charge of the Lunenburg landfill. This, Rennie said, would cause the host fee to go up that much more.

Rennie recommended that the host fee increase to $1.14, saying that the fee, determined in the host agreement, is “not open for negotiation.”

Members of the Lunenburg County Board of Supervisors, after Rennie’s recommendation, passed a motion to increase the county’s host fee to $1.14. Rennie said this increase would mean that the county could receive $1,140 per day from the landfill as opposed to the $1,000 per day it is receiving currently. Rennie said this amount could increase if CFS increases its tipping fees. The landfill has received additional waste since September. CFS, due to a recent lawsuit by the Virginia Department of Environmental Quality (DEQ) and the Virginia Attorney General Mark Herring at its Petersburg landfill, has agreed to move waste from the Petersburg landfill to the Lunenburg landfill.

Representatives from Lunenburg County said in a previous interview that CFS has estimated approximately 300 tons per day are being transferred from the Tri-City landfill to the Lunenburg landfill. CFS is in the process of building a new cell for the landfill, which is expected to open in January 2019 as the current cell will be closing in December 2018.

Rennie said he and County Administrator Tracy Gee plan to meet with CFS’ new parent company, Meridian Waste to discuss the host agreement the county has with CFS.

Gee, during the meeting, relayed some issues that have taken place at Old Mansion Road, near the landfill.

Gee said that waste that recently came off a rolloff truck from CFS resulted in debris on the road.

A resident that lives near Old Mansion Road took photos recently of debris on the road and posted the photos to social media. Some of the waste involved included litter and pigs’ heads.

Gee said when CFS was notified that there was waste on the road, the company sent personnel to remove it.

Gee said a private contractor lost some shingles and some shingle nails while traveling the landfill site and nearby roads, and said the county had received complaints from several people who had flat tires.